Traffic lights are perhaps not as simple as they might first appear. My supervisor for political theory at Cambridge tried to explain the output of every great thinker in this field in terms of ‘traffic light theory’. (Another day...)

This set was actually part of an artwork, a short walk from our London home. 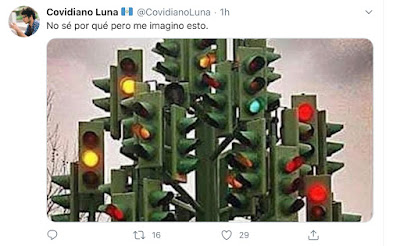 Originally located in the middle of a small roundabout at the entrance to the Isle of Dogs, they occasionally caused more confusion than Giammattei’s Sunday speeches, at least amongst those drivers who weren’t already in the know.

The colour-coded system for regulating our journey down the highway towards the new normal announced by the President tonight has the potential for making this set up look relatively uncomplicated.

This is due in large part to his failure, so far, to commit to a timeframe for defining the alerts. If this is done on a daily basis, utter chaos will duly ensue.

The only reasonable decision-making process would involve — at the very least — a seven day rolling average of reported new infections. And the prevalence of testing and the rate of positive tests by department or municipality surely also has to be factored in.

So in effect you’d need a nested system of traffic lights.

Oh, by the way, a big thank you to all the moronic pelaverguistas around here who have continued to throw (or attend) clandestine fiestas or other social events throughout lockdown. Your collective efforts have lost us half of Saturday now too.