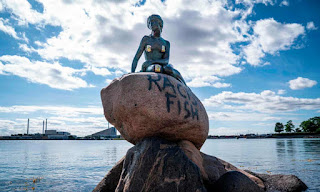 Is this all getting a bit silly?

The Guardian thinks so, especially after it was recently accused of being racist for not having openly supported Abraham Lincoln all those years ago.

The BBC's Countryfile programme also self-flagellated in public last week when it suggested that the entire British countryside might be inherently racist, or at least a place where only whites would ever feel comfortable.

Yet thanks in large part to Donald fucking Trump, we are all getting used to hearing racist dog whistles a lot of the time, and it does seem that a significant proportion of them are in all probability, non-imaginary.

If we take the Donald at his word, perhaps he was unaware of the reference when he posted that 'when the looting starts...' tweet, but when it comes to dog-whistling, it doesn't matter whether it begins as intentional or not.

Here in La Antigua the impulse behind Cervecería Catorce's stance on reggaeton was almost certainly not knowingly racist, rather a kind of smug tribal/musical elitism, but it certainly has the potential to be taken as something a bit more objectionable. 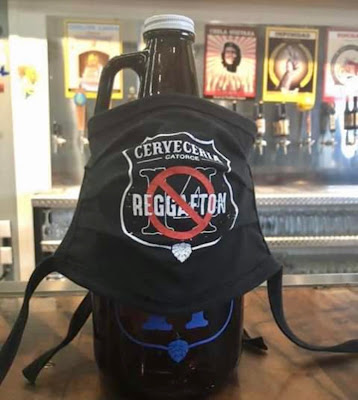 Just imagine a 'no hip hop' sign above the entrance to a bar in Kentucky, for example, and remember the furore kicked off by Howard Stern's opinions regarding Tex-Mex music following the unfortunate demise of Selena.

Musical taste is a minefield and quickly gets co-opted into the culture wars. (And culture wars are America's #1 invisible export these days.)

As a ‘funny’ sign behind the bar this wouldn't bother me all that much, but as the basis of a high-viz consumer brand — a proud identity — something to print on a surgical mask in the midst of a pandemic, it is unmindful, shall we say, particularly from a foreign-owned entity. And as such, it does actually bother me, even though I do like those Impunidads.

You might only listen to Charlie Mingus or Robert Wagner and have high-browed, lowish opinion of reggaeton, but it is currently the music of the street in this part of the world and has a strong association with artists of mixed race. And also with youth, which makes this bit of marketing all the more fusty and 'old', as well as crassly snobbish.

The image above has seemingly been removed from the Interwebs, so maybe someone had a rather belated attack of common sense. These aren't times when it pays to alienate any potential customers.

Heaven knows I don't (usually) like banda, but I wouldn't open a bar grounded on an extravagant antipathy towards it here in Guatemala, largely as I might end up dead as a result. 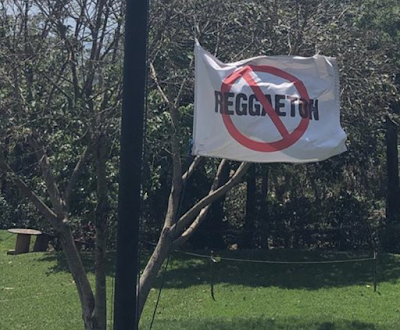 Posted by Inner Diablog at 7:19 pm