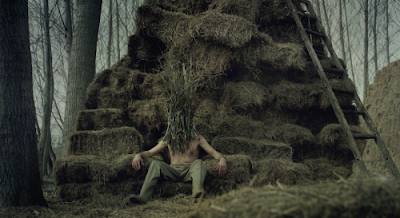 One is reminded of the Nietzsche soundbite: "They muddy the waters to make it seem deep". This pond has some seriously muddy waters.
It's kind of crying out to be called The Pond..erous. And so I will.
A Serbian professor in exile in a desolate, formerly pastoral landscape works on his paranoid magnum opus. He lives with his daughter and new love, latterly his student.

Their limited pool of neighbours include a mute and hyper-weird boatman, chirisbisco-face (above), two rather psychotic young girls of the same age as his daughter and a mysterious local man with whom the professor plays chess, a scenario which ultimately comes to echo The Seventh Seal.
The end result is something relentlessly cryptic; visually, but not intellectually satisfying.
Posted by Inner Diablog at 5:35 pm