Behind much of the recent verbal conflict around Israel-Palestine witnessed outside the region is the notion that the Israelis are colonisers and that the Palestinians are oppressed indigenes.

This fits the wider apprehension held by almost everyone except crazed white supremacists that Jews (and thus Israel) are occidental whereas the Arabs are oriental, and people who prefer packaged ideas to 'raw' history are often rather adamant that colonialism is something that the West traditionally inflicts on the East.

Yet the Arabs arrived in the area very much as miltant invaders. Previously pinned to the peninsula that bears their name, relatively becalmed between Christian Byzantium and Zoroastrian Persia, they gathered and broke out spectacularly a few years after the death of Mohammed.

In the east they were eventually halted by a Tang Dysnasty army and in the west when 'Sword of Islam' Uqba ibn Nafi al Fihri somewhat symbolically (or perhaps over-enthusiastically) rode his horse into the Atlantic beyond Tangier.

They had besieged Christian Jerusalem in 636 and the following year the Patriarch Sophronius handed over the keys of the holy city to Caliph Umar.  The Caliph had a choice to make. He could walk into the Church of the Holy Sepulchre and pray to Jesus, a prophet of Islam, yet should he do so his followers would immediately turn the place into a mosque.

So instead he decided to build a brand new holy site — the Dome of the Rock and the Al Aqsa mosque — right on top of the ruins of the Jewish temple. 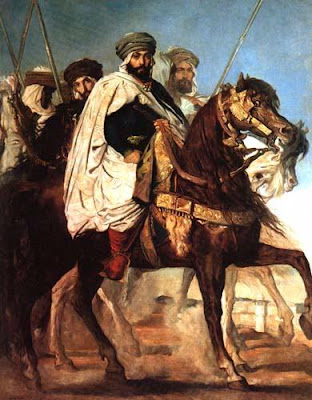 From that single decision made by a victorious conqueror, much trouble has indeed followed. What if he had instead chosen to humiliate Christianity rather than Judaism? In this instance the latter was perhaps the softer target.

What happened after that was a great civilisation, but also a great empire.

Christians did rather briefly re-take Jerusalem four centuries later and no doubt would have flipped the Holy Sepulchre back to their own brand of nonsense, yet one suspects that the contours of the conflict today would still be rather different.

Posted by Inner Diablog at 7:51 pm