You wait many years for a film with a lead character called Guy and then two come along in the same month! 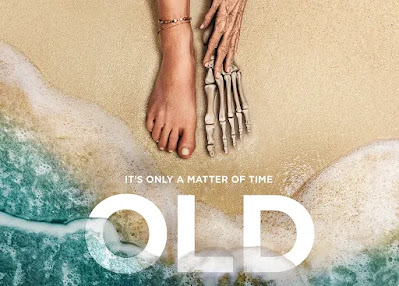 That the one here is being played by Gael García Bernal is one of the many things that feel a bit askew about this latest dose of hokum from M. Night Shyamalan.

The premise is somehow promising yet it isn't his; he picked it up from a graphical novel called Sandcastle by Pierre Oscar Lévy and Frederik Peeters — a secluded beach where visitors age years by the hour.

From that starting point everything is kind of mangled. The casting, the dialogue, the acting, the direction. There surely needs to be some gathering tension and existential dread in the first hour or so, and to some extent there is, but it is served up disjointedly.

Even the way the ageing is handled is unconvincing. For sure it is easier to fast-grow children by swapping actors, but the director doesn't really seem interested in the human ageing process — physical and psychological — and key developments are almost never gradual, but oddly abrupt and uneven.

Perhaps all this sloppiness derives from the moment we are in, for Old has that look and feel of a movie concept that was green-lighted largely because of the pandemic conditions the industry was grappling with. *

In his BBC Five Live show Mark Kermode name checked The Beach and The Twilight Zone as two antecedents that came readily to his mind. To mine too, but only as examples of things I'd rather have been watching.

Still, I was never more annoyed with this movie that when in the midst of all of its idiosyncratic twitches. Now that time has indeed passed, my impressions are perhaps a little smoother and a tad more favourable.

* On TV this year the ensemble cast in isolated spot trope has been explored successfully by The White Lotus. Meanwhile, Nine Perfect Strangers flattered to deceive.

Posted by Inner Diablog at 6:38 pm