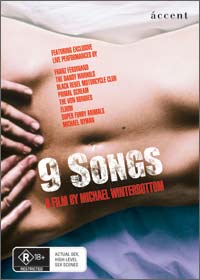 Roger Ebert's review had me laughing out loud: "The sex lacks context and Antarctica could use a few penguins."

In pornography the viewer (or voyeur) is implict in the action. Here too perhaps, but the spectacle is designed not to excite, but rather to communicate some of the mix of claustrophobia and agoraphobia that Matt defines as the essence of his going-nowhere relationship with Lisa.

I was intrigued to learn that Michael Winterbottom originally intended to make a movie version of Michel Houellebecq's Platform. He certainly sets out to reproduce some of the sense of alienation and detachment that surrounds the French novelist's characters, yet by comparison, the romps described in Houllebecq's novel are unapologetically pornographic. (There's even a scene where a chamber maid spies on a couple shagging in their hotel room, before getting the nod to join in the fun!)

Having had two longish relationships with American girls, watching this particular on-screen coupling fell on the vinegary side of unappetising. The 'live' music is very good though, and took me back to that great Manu Chau concert at the Brixton Academy we attended back in 2003.
Posted by Inner Diablog at 3:44 pm