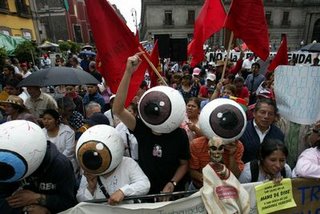 V met a rather interesting character on Good Friday - Professor Carlos Ugalde, traveler, photographer and regional actvist. Born in Metehuala, San Luis Potosi, Mexico, he moved with his parents to California at the age of six. He got his BA from UCLA in 1970 and has been Associate Professor of Latin American and Latino studies at Glendale College since 1980.
Prof. Ugalde has made many trips to Central America (14 during the 80s) but had never taken the time to visit Tikal, an oversight that he corrected last week.

A self-taught photographer, he has published photo-essays in both Mexican and International publications and some of his images can be seen online. He visited Cuba in 1997 for the ceremonial burial of el Che and returned the following year for the visit of the Pope. He told V that he has a photo of the Pope with Fidel Castro which he is very proud of!

The country of Professor Ugalde's birth produced some colourful news stories last week. First a priest called Cesar Torres confessed on Thursday to strangling the mother of his love child on Easter Sunday. The couple had been in a relationship for years and had a daughter 18 months ago. Torres carried the body to a bathroom and chopped it up into little pieces using a kitchen knife, before dumping the remains in a plastic bag in a cemetery - where the bodies of five other murdered women have turned up recently. Hmmm.

Meanwhile the heads of two decapitated policemen turned up in Acapulco. Both had taken part in a shoot-out in January in which four drug traffickers had died. "Para que aprenden a respetar" (So that you learn to respect) said the note left with the heads.

Poll results released last week also suggest that the final stretch of Mexico's presidential campaign may yet be tighter than expected. Two of them put Felipe Calderón (PAN) within four points of Andrés Manuel López Obrador , the former mayor of Mexico DF.

(Ugalde has a younger namesake in Mexico's Federal Electoral Institute who has been tackling controversy surrounding a bill regarding election TV spots forced through a supine Congress by the country's two broadcasting giants, TV Azteca and Televisa.)

Brazil, Chile, Venezuela, Argentina, Bolivia already sport the kind of executives that the yanquis would have worked very hard indeed to undermine during the Cold War years. Obrador's PRD represents the same sort of odd blend of left-leaning populism, nationalistic sentiment and powerful cult of personality that typifies the new politics of Latin America. Many of the established parties that depended on old-style patronage are losing ground with surprising rapidity to the ideologically-vague newcomers. Peru too could soon be in the hands of Ollanta Humala's year-old Nationalist party. The USA's meddling in the Middle East might signify that it is about to drop the ball in its own hemisphere.

Over in Bolivia an even more profound upheaval continues. A former maid with no legal training or even a degree (though she studied anthropology at night while working for the domestic workers' union) has just been made Justice Minister in Bolivia. Casimira Rodriguez went into unpaid domestic service at the age of 13. The National Association of Bolivian Lawyers has demanded her resignation, but her boss, Evo Morales supports her view that a lifetime of injustice is the most appropriate qualification for this post.
Posted by Inner Diablog at 12:35 pm