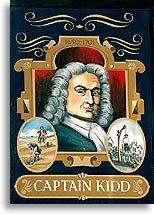 "It takes something special for us to have a bad day," observed one of the river policemen on the Sky Clipper this morning as he looked around for rucksack bombers.

The Thames River Police are based at what was once Execution Dock in Wapping, the place where the Admiralty used to hang convicted pirates at low tide.

A couple of years ago I wrote a review of a very entertaining revisionist history of one of the unfortunates executed here - Captain William Kidd.

Kidd went to his death convinced of his own innocence...and very drunk. According to Richard Zacks, the real villains were Hollywood's long-term favourites − wig-wearing British toffs − that had set up this uncouth but otherwise good-intentioned sea dog and sent him off on a privateering mission that was both morally and commercially suspect from the outset.

Condemned men were permitted to stop at every pub en route to the gallows. This is why today there is only one pub along Oxford Street, which leads to Marble Arch (Tyburn).

From the natter of the rivercops this morning I gathered that there's something wrong with the grog at The Captain Kidd, the pub which overlooks their pier. "Two pints and you feel terrible the next day." And apparently it's not just the beer; the spirits served there have this strange effect too!
Posted by Inner Diablog at 12:01 pm