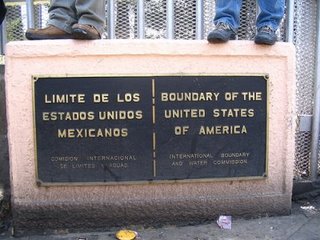 You can try to tell people that certain issues are inherently complex, but they generally won't listen.

Instead they'll just look at the two main polarities on offer and pick one to sign-up to. Whether it's the War on Terror or Immigration, if you want to be heard, you have to be either for it or against it...or you are nowhere.

Except perhaps when it comes to humour. A good gag will often expose the ironies that people would otherwise avoid confronting. The Onion had a great one last week − a week that began in the US with the Day without an Immigrant protests:

"As dozens of major American corporations continue to move their manufacturing operations to Mexico, waves of job-seeking Mexican immigrants to the United States have begun making the deadly journey back across the border in search of better-paying Mexican-based American jobs."

There were boycott activities in 70 US cities with sympathy stoppages in Guatemala and other primary sources of the 11m indocumentados in the States. "The flower and produce markets in downtown Los Angeles stood largely and eerily empty." noted the New York Times the next day.

At the same time, Nuestro Himno, a Spanish-language version of the Star-Spangled Banner performed by Wyclef Jean and the rehabilitated Gloria Trevi, was forcing an opinion out of George W. Bush: "I think the National Anthem ought to be sung in English".

In terms of geography and international law the sourthern border between the US and Latin America is a long thin line. Yet in almost every other sense, historical, cultural, economic etc. it is a far more complex intersection.

Part of the problem would seem to be that the United States of Mexico and the United States of America have conflicting mythologies of origin underlying their political sense of self. North of the Rio Grande displacement of the 'natives' was a crucial step in the formation of this ideal commonwealth of nations. By way of contrast it used to said that in post-revolutionary Mexico there was only one known statue of Hernan Cortes; and that was in a 4-star hotel. Mexico's heroes are indians not cowboys.

Which may be one reason why certain sectors of the American Right view the Hispanisization of their country as a kind of redskin Reconquista. These are the sort of people anyway inclined to imagine their nation as a homestead surrounded by ululating savages; and some of them have been deliberately muddling the issues of immigration and national security by fuelling persistent rumours that maras like the Salvatrucha are being actively encouraged Al Qaeda.

The irony here is that these ultra-violent, transnational gangs resulted from America's post Cold War policy of mass-deportations of Central American offenders from its own inner cities. This gave rise to a multi-country organised crime structure which is far more dangerous than the crack-crazed street gangs originally sent packing southwards.

It's hard to be sympathetic to the border is an inviolable line point-of-view when US government is so energetic about re-modelling its neighbours in ways that favour US business. At the same time that the FTA would establish the free movement of goods, Congress debates legislation which would harden restrictions against the free movement of people. However hard you fortify the frontier, the boundary between the First and Third Worlds is likely to remain at its most nebulous across this hemisphere.

Posted by Inner Diablog at 5:57 pm

"...post Cold War policy of mass-deportations of Central American offenders from its own inner cities"? Where’d you get that little piece of information? (Please cite source). Lived here a LONG time and have an MBA (meaning, I’m an educated man), and have never read anything about mass-deportations. Can you imagine the public outcry if we tried to deport people, en mass? You liberal whacko’s would scream bloody murder!

I’ve lived here (in Texas) all my life, and it's not the illegal immigrants that piss us off, it's the fact that they MOOCH of our system, and don't pay taxes. If you were to open your eyes and take all the REAL factors into account, you'd see that TAXES is what this is all about. Illegal aliens don't pay taxes but they still enjoy the personal freedoms & hospital care & rights that Americans do. if i were to arrive in your country, poor & with my entire family, get a job and NOT pay taxes but still expect you and your countrymen to take care of me, would you be angry? If it was 1 or 2 people, i'm sure you wouldn't mind. But 11 MILLION?!? Somehow i think you'd be a little bit annoyed. Tell you what, if you have such a huge issue with us deporting all the Mexicans, why don't you open up YOUR border and let them stay with you?

If Mexicans paid taxes, no one would have a problem with them. THAT’S what this law (the one they’re trying to pass) will do. it will make them legal citizens and allow them to contribute to our tax pool. Yes… SOME will get deported, but tuff shit… that’s the way it goes. You can’t please all of the people all of the time.

Perhaps the word "mass" was inappropriate, but large numbers of Central American refugees that had fallen foul of US law (and specifically members of the LA maras) were deported back to their countries of origin when the Cold War ended.

buttersnatch, you make some points as well, but calling people "liberal whackos" doesn't really do your argument justice. In fact, many illegals DO pay taxes. Many DO contribute to the system. They also contribute to the low-wage labor pool Big Business loves so much...why do you think Bush appears "soft" on immigration?

In some states and localities, undocumented immigrants actually constitute a net gain to the economy...in others, a net loss. I would be glad to post some research if you care to discuss this further.

In addition, Blogador is correct that the main maras operating in Mexico and Central America have their roots in California prisons and were born of deported immigrants. Not that that in any way mitigates the depth or conplexity of the problem.

Finally, true patriotic Americans such as myself recognize the importance of coherent immigration and border security policy as well as the historic legacy of immigrants to the US. It is certainly not an issue that can be reduced to a binary...and that brings us full circle to his original blog post, which asked for thinking that extends beyond the usual pro- and against immigration positions.

Yes, I was sure that I hadn't been arguing the case for illegal immigration into the US!

I did however suggest that some of the strongly anti positions fail to fully consider the bigger picture.

The taxation argument is interesting. It's not an issue that comes up a lot over here, but then our Immigration debate focuses more on legals than illegals. Also, we tend to fret more about what our immigrants take-out through benefits than the contributions they might be dodging.

According to the Times Britain is currently experiencing "the largest wave of immigration for at least 300 years" (since the French Huguenots)These are predominantly Poles, who now number around 350,000, and are generally considered to be ambitious, hard-working net-contributors. Other EU countries have yet to open their doors to the "New Europeans".

My father has an aged and cantankerous Polish gardener who complains all the time about the "bloody foreigners" in rural England.

Unlike previous 'waves' of Immigrants (there are over 100,000 Brazilians here for example) the Poles are quickly spreading out to small provincial communities and helping to galvanise their often quite complacent local economies. (Crewe in Cheshire, with a population of around 45,000, is home to about 3,000 Poles)

I recall that a recent survey in the US found that Hispanic migration was also spreading more widely beyond the big cities than many had imagined.