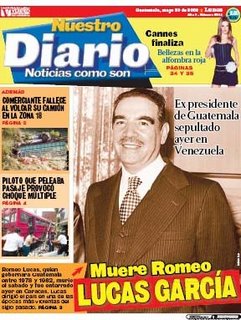 Romeo Lucas García, perhaps the most notorious of all of Guatemala's military rulers during the Civil War (and for many years the object of some of the country's cruelest political jokes), has died in Puerto la Cruz, Venezuela aged 81.

"Lucas" was briefly put under house arrest in Venezuela in 2005 after a Spanish judge had sought his extradition for his role in the 1980 police raid on the Spanish Embassy in Guatemala City that killed 37 people including Vicente Menchu, padre of Nobel Peace Prize-winner Rigoberta Menchu.

This weekend La Menchu expressed a desire to one day seek election herself to the presidency of Guatemala. Well, she couldn't be worse than Lucas...could she?
Posted by Inner Diablog at 1:31 pm