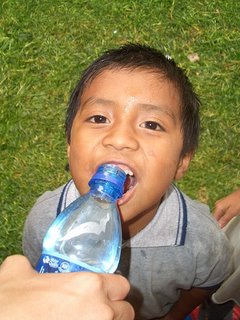 V and I recently had an amusing debate about the possibility that this photo from Guatemala (spotted in a Flikr pool) could have been taken with pervy intent. It took me back to Jill Greenberg's notion that we project our own subconscious depravities back onto the images we see!

Anyway, it's certainly true that on maiden visits to the Third World, people tend to take a whole load of pictures of children. A glance at my own album from Belize in 1988 confirms this. Nevertheless, between the two extremes of voluntary worker and sex tourist, there are many transients out there in the developing world that have never really got over this, and are perhaps never really happier except when surrounded by packs of apparently adoring, underprivileged kids. It's not quite unconditional love, but they are generally easier to please than their parents.

In Antigua there's a crusty old yank that cruises the market with a cute little puppy that he all too obviously uses as a kid-magnet. And around a year or so ago I heard the story of a CIA agent in Guatemala that was running a safe house for street kids that turned out not to be such a safe place for them to stay. He was found out and fired, fled to the states and shortly after arrested for a gruesome murder. The last we heard he was claiming to have been acting under orders.
Posted by Inner Diablog at 6:41 pm