All over for another year... 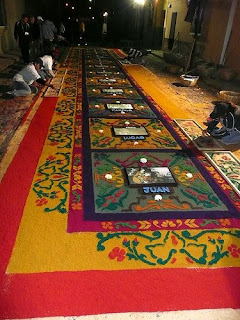 So, Semana Santa is over and Antigua is back to its habitually tranquil self...perhaps even quieter than usual because many of the inhabitants left behind by the hordes will be that much poorer having spent the whole of last week chucking their money away on a range of crap they can ill afford. If oil painting was my thing, there's an image I witnessed on Friday which I consider worthy of commitment to canvas: Campesino with Capuccino.

Easter here really is a classic system for making the rich richer and the poor poorer. The big winners are the hotels and restaurants, the Muni and of course the Catholic Church.

But for the households who participate by carpeting the cobbles with unique, multicoloured alfombras made from coloured aserrín (sawdust), Easter will surely have portended the very opposite of a seasonal windfall.

There's also a great deal of hard work involved as the dyes are purchased separately and appplied over a period of several days in advance of the passing of the processions.

My brother-in-law recently explained to me how sawdust has become almost prohibitively expensive over the last few years with the result that there are now fewer ceremonial carpets and more of those that you do see are made with pine, coroso and flowers. I rather facetiously remarked that in that case all the carpet-makers of Antigua should go on strike and refuse to come out on Thursday night unless the Muni and the Church agree to subsidise them!

Devotion aside, they would appear to have considerable leverage in this respect, and it strikes me as a tad unfair that they're not raking it in like the aforementioned institutions. It's hard to see how Antigua would have been voted best foreign destination this year without the spectacle of Semana Santa. The city is lovely all year round, but the processions are a core part of its international reputation.

Indeed, if I were the Mayor I'd investigate the possibility of offering all households below a certain income level a voucher entitling them to a discount on the purchase of sawdust and other key materials. The current incumbent of the Ayuntamiento obviously thought it was a smart move to keep his pre-election promise to cobble all the streets of our colonia in order to shore up support round here, so the alfombra-subsidy idea might also appeal to his strategic sensibilities. And Antigua itself can only benefit (and that means all those salesmen of opportunity too) from measures which slow up any degeneration in these age-old traditions.

Posted by Inner Diablog at 5:33 pm

El Blogador, I keep reading references to the Church getting rich off these processions, but it's all innuendo. I've had locals explain costs to me that are astounding-bands, permits, fees, uniforms, equipment rental, etc.-but which don't include funds for the Church.

Anti-Catholic propaganda, legend, or is there something to this?

Sure there is considerable outlay, but the income is very substantial as well.

Here in Antigua each turn costs around Q60, but in the capital the charge for each cargador can go up to Q400 - and there the andas have space for 100+ brazos, so in theory that could deliver revenue of Q40,000 for each couple of blocks the cortejo covers. So you can imagine the eventual size of this windfall after 8-10 hours on the road.

The aspirantes (kids) who don't even carry the float also have to pay around Q35 here just for the privilege of following the procession in their tunics.

The Church does have to pay a fee for the bands and the Romans etc, but much of the equipment is owned by the institutions and a substantial proportion of the costs are covered by wealthy local donors - for instance, all the flowers on the La Merced float are traditionally provided by the Finca Carmona (along with a substantial donation of money) and someone else will usually pay for the Virgin's new cloak etc.

Though I have conflated "The Church" with "La Hermandad" and I suppose that leaves me open to the alegation of cheating!

A fellow Antigua blogger told me the band alone for La Merced was 35,000Q. I don't mind the Church making some money, but paying to participate in a procession is somehow offensive.

Yes, I can imagine that the band is one of the biggest costs involved.

In the case of La Merced the Hermandad is responsible for organising the whole show. They own all the Roman outfits, staves etc and my understanding is that this gear is replaced every 10 years or so (but annual maintenance costs tend to run at around 10-20% of the original outlay.)

They get plenty of donations as I mentioned before, and the Roman cavalry comes courtesy of the Kaibiles, Guatemala's elite special forces unit.

Being separate from the Church (the body that owns the building and pays the priests etc) the Hermandad probably has little choice but to charge for 'turnos'. How much profit the Hermandad makes each year is anyone's guess, but I suppose their Easter revenues have to pay for a whole year's worth of brotherly activities.

It would be better in my view if the whole thing was just a bit more transparent because the Holy Week processions are the biggest event in our economy here each year and I still feel that the people who spend a whole night making those wonderful carpets should somehow share in the overall benefit a bit more.

The whole thing is a lot more commercialised in Guatemala City. Here you pay once and can carry several times for that one-off fee. There you have to pay separately for each turn and there are different prices for different sections of the city. Q400 is the 'VIP' fee for the streets close to the cathedral for example. In Antigua the turns are usually organised purely and simply according to the height of the cargadores, with no premium tickets for going around the parque central.

Another idea my brother-in-law has suggested is a more formal incentive system such as a series of prizes for the best 3 carpets overall, with perhaps 'local' prizes for particular zones of the city.

Meanwhile the mayor now charges Q10 for every car (Q40 for a microbus) entering Antigua during Holy Week, another new revenue stream driven by Semama Santa.

He might consider the whole event 'in the round' in terms of costs and benefits and look for new ways to ensure that a wider base of residents experiences it as a gain.