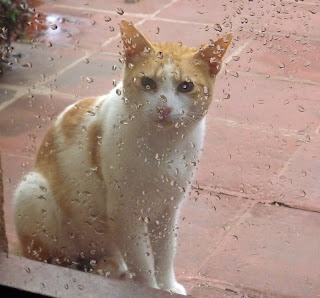 That the number of private houses around here with significant basements or even bunker complexes was next to zero, is one of those fixed assumptions that I have carried around with me for two decades.

Not so in the capital with all its weird gradients, but here in La Antigua underground levels would be expensive, inconvenient, rather pointless and perhaps even a little dangerous...surely?

So I was gobsmacked the other day when I witnessed an SUV passing through a big wooden gate and then down a steep ramp into a home that had clearly been constructed from subterranean first principles. We're not talking about a dusty old cellar here; the main entrance and all of the reception rooms appeared to be below ground level. ('Beneath a cliff,' said V) Indeed the windows in the exterior street wall may well have been a sham.

I wonder what the consejo make of bunkers? Do they disapprove of building down as much as they seem to of building up? The room I'm sitting in now — my third floor office — had to be architecturally disguised, or at least hidden behind the two-level facade, in order for us to secure their approval. (It might be worth mentioning at this point that someone told me recently that the Guatemalan state owns everything below ground level and everything above a certain height by default.)

Anyway, one assumption that is perhaps still worth hanging onto is that the traditional English distinction between one's neat little garden and the insulated interior world of one's castle, simply doesn't exist here in colonial-style architecture.

The other day my father helpfully suggested that we should install a cat flap. Tricky, I replied. Aside from the garage gate, we have 18 doors, exactly half of which act as a barrier between 'indoors' and 'outdoors', plus three full-length iron and glass balcony exits, which the cats would make use of given half a chance.

Last night as we walked the dogs, we once again touched on the idea of building a house on our other plot. If we do, it's going to be a lot more open plan, with fewer rooms...and doors.

At 7km from the centre, strict colonial adherence will be less of an issue. (V says her principal inspirations will be the work of César Manrique — especially the house at the Mirador del Rio — and the terraced layout of the Royal Observatory Garden in Greenwich.)

Posted by Inner Diablog at 6:12 pm