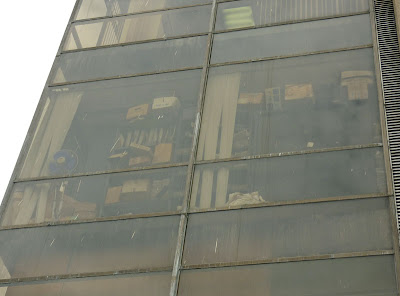 Last week I had cause to wonder whether Guatemala's tramitadores might have become as endangered as the axolotls.

For my induction into the process of dealing with the local bureaucracy at the Finanzas building in Guatemala City (pictured) turned out to be a whole lot less painful than I had anticipated.

In fact I was at first caught out by the speed of service: having been given a number and a form to fill out, I hadn't managed to complete said form before my number was called...and so was duly sent back to get another one!

I was soon back at window No23 and the expected barrage of trabas was immediately forthcoming. My assembled paperwork was sifted through dismissively and I was informed that I appeared to have turned up without the necessary documentation from the shipping company i.e. I was screwed.

But then, somehow, I managed to achieve an almost complete turnaround in the attitude of the bureaucrat allocated to my case. What followed was a veritable arrebato of calculated leniency, which included letting me off a missing photocopy. (OK, this was a page without any actual relevant information on it.)

Adopting a gentle manner akin to that of an indulgent parent, he painstakingly collated all the sheets of paper I had presented to him and at last informed me that there would be one final piece of sidetracking: a trip back down to the ground floor to pay Q50 to Banrural before returning for another numbered position in the line. But don't worry, he told me with a knowing smile, there's hardly a queue today. I'm sure he could spot the look of utter bewilderment on my face.

I was soon on my way out of the building, passing a few rather resigned looking tramitadores, surely destined to be victims of the Guatemalan state's leisurely modernisation. Nevertheless, the fact that this particular tramite still requires a visit in person to a government building in the capital regardless of where one actually resides in Guatemala, probably means that their final extinction will yet be posponed for a few more years.

Anyway, as part of this recent undertaking I've discovered an interesting little local tax called the Boleto de Ornato. Every January or February Guatemalan citizens (and, as it turns out non-citizens too if they want to get anything done) are obliged to pay a small sum for their boleto, which is supposed to cover any costs the local Muni incurs each year relating to the beautification or indeed just the tidying up of the local urban environment.

Here in Antigua the 'cheapest' one costs Q10, but if you decide to buy it any time other than the first two months of the year you pay a 100% fine: so in my case I paid Q20. It won't matter if you weren't in the country in January.

Now the intriguingly barmy thing about this tax is that it is in a sense voluntary: nobody will come knocking on your door if you don't pay it. Yet in spite of being a local tax tied to local services, the key incentive one has for paying it is not in fact a nicer set of lights in the parque at Christmas, it's the fact that one can't expedite any paperwork with the national government without presenting this year's Boleto de Ornato.

Posted by Inner Diablog at 1:19 pm

Actually, the main reason most Guatemalan pay the boleto de ornato is because you know you will be asked for it any time you have to do a tramite, from getting your calcomanía (vehicle registration) to requesting a copy of your birth certificate, as well as to get the new plastic ID.