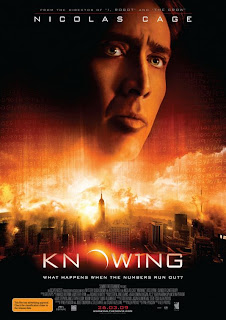 After watching Knowing I tweeted that the difference between an averagely bad movie and a truly abysmal one was in this case a pair of white rabbits...and of course, Nicholas Cage.

And yet this is the movie that Roger Ebert rates as one of the best sci-fi films he has ever seen. Er...Hello?

Ok, chop off the icky sub-Spielbergian section which has been blended rather awkwardly with the glum 70s sensibility of the rest of the final act, and you do have almost two hours of often quite gripping entertainment. And the grisly consequences of seemingly contingent events are portrayed strikingly.

I've always thought that the better kind of science fiction is that which teases out thought-provoking insights from striking conceptual premises. The trouble with Knowing is that it makes a clumsy conceptual mis-step almost from the get go, from which, on a purely intellectual level, it never really recovers from.

Anyone who thinks it's a complete waste of time to critique the ideas behind rubbishy movies can stop reading here...

In an classroom supposedly packed with America's finest young minds, astro-physicist John Koestler sets up the philosophical distinction between causal determinism and randomness in a way which leaves the door wide open for theology (not to mention UFOs).

He's simultaneously over-simplifying and misrepresenting this pair of apparent opposites: either 'shit happens' or everything happens for a reason'. Now this might be how the happy-clappies like to see the world, but it's hardly a position that's going to appeal to many academics out there in the real MIT.

But plot-wise the conflation of determinism with destiny is relevant, because the extra-terrestrials here don't just have advanced knowledge of events here on Earth, they have been manipulating our causality in a way that's bound to look a lot like Divine Providence to anyone experiencing it.

Anyway Koestler has in fact crystalised one of the great uncertainties of human existence. People tend to handle this uncertainty in different ways. A small minority — let's call them the religious nuts and the nihilists — go into flagrant denial: there is no uncertainty. Shit happens in ways that are either absolutely meaningful or absolutely meaningless.

Fortunately the vast majority of human beings still fall into the altogether less zealous zone between these alternative head trips. Some like to refer to the uncertainty as the 'spiritual dimension of life'. Others go a bit further in their affirmative reponse to the conundrum, subscribing fully to what philosophers call the God hypothesis — a placeholder for a real explanation, but nonetheless one that enables them to manage the uncertainty within the context of their own lives (and mortality).

Many of these individuals will refer to their God hypothesis as 'faith' but in fact it is usually a more rationally-constructed response than either they themselves or the likes of Richard Dawkins are willing to admit, and therefore also perhaps less infantile than it is has tended to be characterised by some contemporary atheists.

I'm happy to admit to being an infidel myself...but one who is comfortable with uncertainty and who senses the obligation to seek tentative rather than absolute explanations and solutions to the problems arising from the fundamental mysteries of our condition.

This movie bothers me because it's central protagonist has by the end gone from 'shit happens' to 'I know'. But how does he know? What is it about this close ecounter with the 'whisper people' — alien meddlers got up like a late 80s German techno band — that has convinced him to renounce uncertainty?

And why did these all-seeing aliens screw with the mind of Lucinda back in the 50s when she clearly wasn't going to be one of the chosen? They could also not have settled on a more annoying breeding pair of young yanks than Caleb and Abby. (The latter getting over her mother's plot exit discomfortingly quickly.)

Poor old Rose Byrne. The last three movies I've seen her in have been sci-fi flicks in which she falls just short of the finishing line.

Posted by Inner Diablog at 1:20 pm

Thank you for letting us know... I was actually so close to watch that movie yesterday... Instead I watched Duplicity and I think it was nice...