Testing out an exotic product 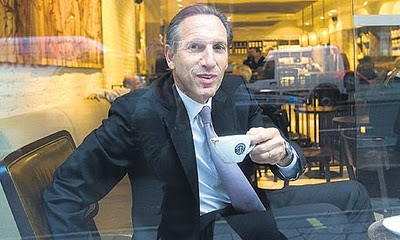 I met Frode yesterday at his 'office', the swanky new Starbucks in Conduit Street. Inside there were banks of leather bound books (bought by the yard?) and plush, high-concept items of furniture. "It's experimental....unique in the world," he explained.

The big table down below where the laptop addicts are supposed to congregate was fashioned from an enormous slab of rusty iron: 'Belgian Industrial' apparently! I'm not sure how this was supposed to reflect the history of a Regency side street famous in times gone by for its bespoke tailors (my grandfather used to have his suits done at Lord & Stewart at #41), but anyway, the idea behind this explorative decor was explained quite adequately in the Guardian:

"With blond wood, distressed cabinets and second-hand mid-century modern furniture, it is a marked difference, even though the corporate hand behind the shabby chic is still evident. The idea is to individually design each store to fit in with its local area so that no two Starbucks will look exactly alike, a remarkable rethink for a company that has been so closely linked with the idea of the corporate giant leaving its homogenous mark on every high street. Actor Rupert Everett, petitioning against a new Starbucks close to his home, described it as a "cancer" spreading through Britain."

London now boast over fifty ethnic minorities with more than ten thousand members, which certainly makes it the most diverse metropolis in the world and perhaps makes it the ideal place to test out branding reboots prior to expensive global roll-outs. McDonald's did it with their Holborn branch a few years ago, and last year the funky Big Brother-style seats which first appeared there made their way to New York for a second-stage trial.

When I arrived yesterday it seems I'd just missed the CEO of Starbucks Charles Schultz (pictured above), who'd been at the centre of a media gathering in there to crow about the company's Q1 results (a 4% gain in same-store sales and profits of $353m, up 200% ), the first time he's done this outside the USA. He'd obviously formed a similar opinion to my own about the Dyson 'Air Blade' driers, because on exiting the Gents' he was tellingly reluctant to shake anyone's hand, it was reported.

I was quite pleased to discover that all of the UK's Starbuckeses now offer free wi-fi, as long as you get one of their cards and use it to pay for your beverages.

Here's a video presentation of the new cafe and a Flickr set....plus a snap of Frode in situ: 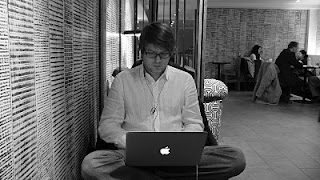 Posted by Inner Diablog at 4:30 pm