"On Monday, February 16, 1981, I was hired as a temporary chambermaid for three weeks in a Venetian hotel. I was assigned twelve bedrooms on the fourth floor. In the course of my cleaning duties, I examined the personal belongings of the hotel guests and observed through details lives which remained unknown to me. On Friday, March 6, the job came to an end."

An extract from the blurb accompanying L’Hotel, a series of voyeuristic photographic observations made by Sophie Calle of the items in these rooms, that were at one stage on show at the Tate in London and went on to inspire a stage play by Mexican actor-come-director Lila Avilés which evolved into her first feature film. 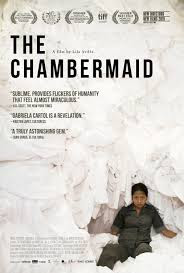 And perhaps if this had focussed more on the reverse anthropology conceit in Calle's installation the movie might have been more consistently interesting. Instead it uses atmosphere (very effectively) to show us multiple aspects of its protagonist's invisibility, with the whole not quite adding up to a fully coherent story.

Like the art work that inspired it, the film is fascinating in an almost photographic way, as a collection of stills or vignettes that inspire further contemplation beyond the narrative line.

Mexico has a solid tradition in a sociological cinema of race and class, where non-professional actors have often excelled. As Eve, Gabriela Cartol is a pro, seemingly trying to capture the guilelessness of an amateur. It works some of the time, but there are moments in the movie where both the lead and the director seem to be too visibly struggling to project a depth beneath the blankness.

Posted by Inner Diablog at 5:17 pm