Spanish-speakers will probably be alert to the shared root of the words for cow and vaccine.

At the end of the eighteenth century British zoologist Edward Jenner had observed how milkmaids seemed to be immune to smallpox.

He subsequently established that this immunity appeared to be conferred by the pus from their cowpox sores, a disease contracted occupationally, which in turn had been transferred to the cattle by horses which were vulnerable to an ailment known as 'the grease'.

In 1796 Jenner injected this cowpox pus into the arm of James Phipps, son of his gardener, and thus the world's first vaccine was born.

The institution of slavery had a hand in modern medical advances as slaver ships often carried scientific observers who would duly note all the relevant symptoms generated by different afflictions that became rife below decks in the hold.

But in Latin America at least, slavery would also play a key role in the way Jenner's vaccine was distributed. 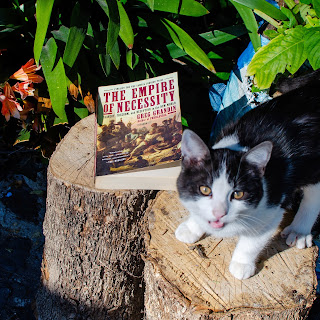 The story is told in a fascinating footnote in this rather wonderful book by Greg Grandin...

“In 1803, after his daughter died from the disease (smallpox), Spain’s King Carlos IV ordered its vaccine (a practical version had been recently fabricated by the British) to be disseminated throughout his dominion. Francisco Xavier de Balmis, the doctor who headed the royal expedition appointed to carry out the task, decided it was best to transport the vaccine live. Twenty-two foundlings aged three to nine were boarded on a ship: doctors made a small incision on the arms of two of them and inserted a mixture of lymph and pus, which after a few days produced the pustules that would provide the material to vaccinate the next two boys. The procedure was repeated until the ship reached America. Once there, the foundlings were feted and praised, laid at the foot of church altars, and adopted by the king himself as “special children of the country.” But Balmis’s team didn’t have the funds to cover all of Spanish America. It turned to the one institution that already reached across the far-flung realm: slavery.

“In Havana, Balmis bought four young slave girls, whom he used to send the vaccine to the Yucatan (once they performed their service, the two girls were sold). At first, slaves were sent on journeys specifically organized to transport the vaccine. But as time passed, it became easier just to use already established commercial routes, sending the vaccine “arm to arm of the blacks” who were being shipped as cargo. Portugal had from the beginning relied on African slaves to get the vaccine across the Atlantic, sending it to Brazil in the arms of seven enslaved children. It was then taken to Río de la Plata in a shipment of thirty-eight vaccinated slaves who were to be sold in Montevideo. An African woman “with pustules in perfect development” carried the vaccine to Buenos Aires. And from there, slaves took the “miracle discovery”—which made slavery much more profitable for slavers—through the rest of Argentina, over the Andes, and into Chile.
“Interestingly, before the Spanish began to disseminate the vaccine through the arms of orphans and slaves, the naturalist Alexander von Humboldt reported that young African slaves and Native American cow herders on the slopes of the Andes knew that exposure to the tubercles of cow udders protected them from the pox. Africans and Indians, Humboldt said, “display great sagacity in observing the character, habits, and diseases of the animals with which they live.”