There's something weirdly wonderful about this BBC/Canadian-funded flick, written and directed by Sean Durkin (He of Martha, Marcy and so on). 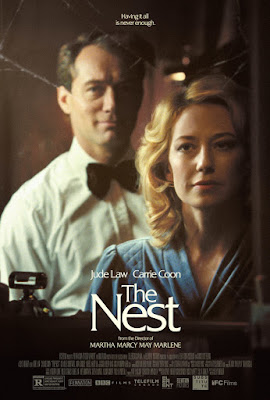 It could have been scripted from the outset with Jude Law in mind, though it seems we watched it just a bit too soon after The Third Day such that that besmirched white linen jacket was hard to dispel from the mind. If Jude was cast almost by default, Carrie Coon's inclusion was a little more inspired.
The main action is located in a permanently autumnal England of the mid-eighties, roughly between my last year at school and the end of my first at university, a setting that is both rousingly recognisable, whilst amusingly filtered through transatlantic goggles.
There's a similar duality to plot and script as well, in parts very much on the nose with admirable precision, in others almost excruciatingly off target. (The less said about a horse disposal sub-plot the better.)
There are not many films these days where I can say around the midpoint that I have no idea where it is heading, and that is generally a positive, especially when accompanied by the sensation of being gripped.
As the conclusion loomed I started to wonder if Durkin was planning on ending it every which way he could, but he drew back from the near simultaneous calamities he'd apparently been lining up, leaving his protagonists, rather like 2020, significantly battered and largely bereft of either the means or the disposition to carry on, and yet intact and importantly, still together.
How this became listed under 'Romance' on the IMDB is a minor mystery. Someone must have seen the poster and not the film. The original score by Richard Reed Parry might also have provided a few early clues as to how much of a feel good experience was to be anticipated...
Posted by Inner Diablog at 5:16 pm

Emergency Cash Loans Hello Everybody, My name is Mrs. Phyllis Sue South. I live in UK London and i am a happy woman today? and i told my self that any lender that rescue my family from our poor situation, i will refer any person that is looking for loan to him, he gave me happiness to me and my family, i was in need of a loan of $350,000.00 to start my life all over as i am a single mother with 2 kids I met this honest and GOD fearing man loan lender that help me with a loan of $350,000.00 U.S. Dollar, he is a GOD fearing man, if you are in need of loan and you will pay back the loan please contact him tell him that is Mrs. Phyllis Sue South that refer you to him. contact Dr. James Eric via email: financialserviceoffer876@gmail.com Whats-App +918929509036