I guess there are several ways to appraise this movie, but most obviously in terms of its animation and storytelling versus its metaphysical payload.

I know I can all too easily be sucked into the latter, so I am going to largely avoid the temptation. I'm grown up enough to enjoy a good ghost movie without believing in spirits, and I don't think one has to be heavily invested in mind-body dualism in order to get a kick out of the humour and imagination that went into the making of Pixar's latest film. (Actually, one doesn't even need to hold jazz in particularly high regard, for that matter.) 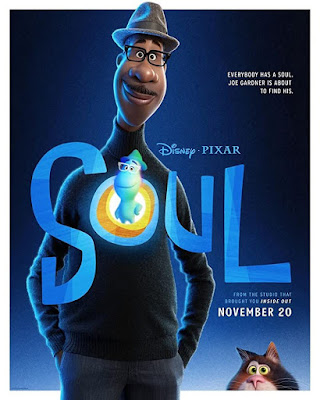 I thoroughly enjoyed it from beginning to end and although it used to be the default that each new animated feature that came out of this studio was incrementally better than the last one, it's been a while since I have genuinely felt that to be the case, yet Soul really could be described as their best yet, on some levels, if not all.

There was a part around the mid-point where I did start to feel I perhaps wasn't entirely on board. Bertrand Russell said we mistake the struggle for life with the struggle for success and the film itself seemed on course for making this mistake, until suddenly, upliftingly, it wasn't.

And anyway that part featured a particularly wicked calico cat, so I was cool with it!

The scenes located in the Great Before and the Zone reminded me of rather trippy dreams I had as a young child. This colourful overworld didn't quite hang together and one supposes that attempts had been made to offend as few true believers as possible and the end result was a sort of cake and eat it ontology.

It did make me ponder what would happen if we were to suddenly suffer from a collective religious amnesia, misplacing the over-bashed texts we have accumulated from decidedly less informed times, and had to come up with an entirely new and modern existential rationale for the next generation, starting entirely from scratch.

Soul starts off down that road, but it's an American product at heart, addressing American audiences before all others, so it pulls up before the whimsy can fully present as doctrine.

Overall rather glad it was this movie we chose to watch on New Year's Eve (2020) and not the one from the night before.

Posted by Inner Diablog at 1:33 am