This movie is basically one big WTF from beginning to end. I guarantee you that if I were to start fully describing the premise and how it pans out, you would soon start facepalming.

The 'absolute blast' described by the poster comes afterwards when one learns that this feminist WWII caper with lashings of misogyny and suggested gaslighting was co-written by a man accused of abuse in Hollywood by eight different women. 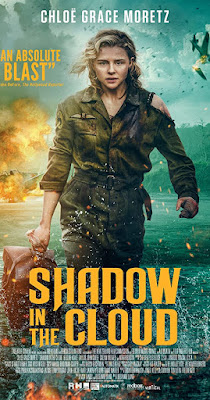 The action is set on an American bomber dubbed The Fool's Errand en route to Samoan islands from Auckland and there are some very strange individuals on board. Describing two of them would involve unnecessary spoilers, but there is also a grisly Scotsman and a gremlin.

The latter can be rather unfavourably contrasted with members of the rampaging reptilian mob in Joe Dante's 1984 classic, which were comfortable as both actual and metaphorical presences in the plot. This larger, more bat-like cousin is seemingly disconnected from all the other unfathomable stuff going on around it, including an apparently impossible attack by Japanese zeros.

It's true that the term Gremlin originated in the RAF during the 1920s, but these little beasties were always supposed to be mischievous rather than downright malevolent.

Anyway, the sense of foreboding I was left with was the realisation that low budget genre movies made in New Zealand may soon end up representing a greater proportion of our overall feature length viewing options.
Posted by Inner Diablog at 1:49 am