The Evilevers S01E02 'The Last Supper'

And thus, unaware of the semi-severed connection between Jason Lever and that other con man 'Don Marco', we took ownership of the property adjacent to his in 2013.

Our first face to face encounter was not long in coming. We were walking our dogs on the road close to the old Spa, a few hundred yards from our main entrance, when Lever suddenly appeared from around the corner on his scooter and was duly chased by three of the dogs that reside at the Santiago de los Caballeros school there.

He stopped, apparently to introduce himself, but his opening remarks concerned his canine escort. When they follow me this way, he said, I like to stop and kick them.

Then, perhaps sensing our gathering dismay at this carefully packaged first impression, he continued: "But, if they continue to bother me, I'll give them some food..."

A moment of relief. Was he extricating himself? No.

He described the crowning morsel thus: a big juicy steak packed with aspirin, "so they bleed out on the inside..."

Perhaps the most disturbing part of this was that there had been no question for either of us, at least at first, that Lever was trying to impress us, yet as the violent fantasy he projected grew darker, the insinuated threat that it betokened became ever less equivocal.

To all those that bother me, he seemed to be saying, I might start off with some reflex and fairly mindless aggression, but thereafter, if they don't back off, I will come up with something altogether more premeditated and vicious.

Several years later I would hear Lever boasting of how he lacks empathy, as if this were some sort of Australian superpower. But by that time we did not require any verbal confirmation.

Animal cruelty is a behavioural marker of delinquency, and worse.

That very first exchange with a man who thought this was an appropriate way to present himself to a couple out walking their three dogs, has remained vivid in my mind, increasingly leavened with hindsight.

At the time we were still resident in our original property in the village, a three storey town house, but the more extensive garden at the new place acted as a constant lure, and while we employed a builder called Edwin to establish basic level of habitability through 2014, we would show up with our dogs most afternoons just to enjoy the open space.

On one such occasion Edwin shared with us a short video he had made with his mobile phone. He had been working on some stairs and a narrow terrace along the inside of the front wall, which would provide our German Shepherd Jin with a zone of his own to patrol. From this position Edwin had a partial view into Lever's front garden as our neighbour was already being quite obstinate in his refusal to build his own wall.

Lever had appeared carrying a small black puppy that he had recently taken in and had started to repeatedly punch it in the belly. He then bent over and pushed the puppy's snout into one of the cactuses that were clustered there, rubbing it repeatedly back and forth, seemingly oblivious to the dog's wails.

This was one of the most disturbing things I have ever been made to contemplate, and I've seen some messed up shit.

And it was not an isolated incident. On numerous other occasions we could hear the abuse of this poor little puppy taking place next door and our own dog Mochi always used to go crazy with alarm and, dare I suggest, empathy.

Eventually Mochi would start to react frantically at the mere scent of our lurking neighbour. (She died last year from a mysterious internal bleeding that our vet tried unsuccessfully to treat with antibiotics.)

For us both it is a matter of profoundest regret that we did nothing about it at the time. This was what we have come to see as 'the period of appeasement' (the subject of a future episode), the span of two whole years where we repeatedly witnessed disturbing examples of unhinged behaviour, yet took no action because we ourselves were not the direct objects of it. The path of least resistance was to look away.

Though in the specific case of the animal cruelty our options were then fairly limited, as Guatemala had yet to pass its Ley de Bienestar Animal (2017).

Lever, apparently aware that we had become inconvenient witnesses to his callousness, made a ham-fisted attempt to apologise to me one afternoon in the village, when I bumped into him walking the puppy with his then girlfriend.

The problem, he explained, was that he had grown up with female dogs and was just not used to males.

Shortly afterwards the little black puppy disappeared and was replaced with two bitches.

PS: Edwin has gone on to become a witness to Lever's constant moronic and brutish harassment of my wife.

In this still taken from a security cam video (2018) he is standing in our entrance along with a colleague, conversing with V about another project when Lever whizzes by again insulting her both verbally and with an obscene gesture. 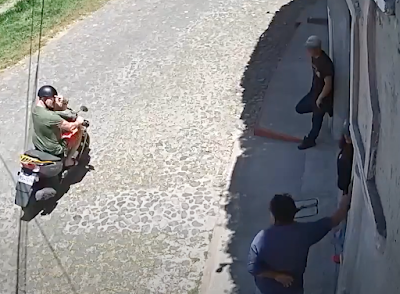