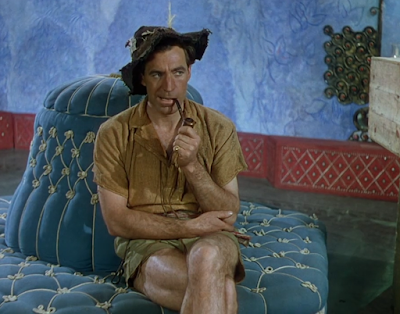 The summer season in Monte Carlo ends expeditiously each year on the last day of August.

In a blink of an eye all the 'beautiful people' vanish and their briefly-vacated cabañas are soon reloaded with chaps who look an awful lot like David Farrar here in Powell and Pressburger's Black Narcissus (1947).

You can't see them in this screenshot, but yes, he's wearing leather sandals. Though a pair of wooly argyll socks would have completed the costume.

This dramatic transition in the prevailing sartorial climate occurs because the principality plays host every early September to the world's largest reinsurance convention, these days known as the Rendez-Vous de Septembre.

However, the 64th edition last year was cancelled along with a lot of other large gatherings in 2020.

Posted by Inner Diablog at 3:45 pm