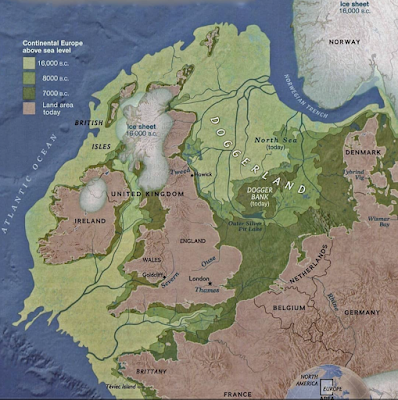 As the ice sheet advanced and retreated over the north west of Europe, human beings repeatedly pushed up into the landmass that would become the British Isles. Yet there was no permanent settlement until around 15,000 BC.

The so-called Jurassic Coast was not then a coast at all and what is now the North Sea became a hot and humid zone of woodlands and wetlands: Doggerland, a landscape and lifestyle opportunity described thus by Peter Ackroyd in Foundation...

Oak woods, marshes covered by reeds, and open grasslands covered the land. It was a warm and humid world. Red deer and voles inhabited the landscape; but they shared it with elephants and macaque monkeys. Among them wandered groups of humans, twenty-five or more in each group, pursuing their prey. They fired upon the animals with flint arrowheads, and used carved reindeer antlers as axes; they carried wooden spears. We do not know how they were organized but the discovery of ‘butchery sites’, where tools were manufactured and food prepared away from the main settlements, suggests a measure of social control.

Modern identities like 'Celt' and 'Anglo-Saxon' are to some extent a vestige of nineteenth century nationalist posturing. Post-imperial migrations from what is now Scandinavia and other parts of northern Europe were part of an older and deeper process. Ackroyd additionally notes how this prehistoric pedigree has persisted in the populations of England.

In 1995 two palaeontologists discovered that the material from a male body, found in the caves of Cheddar Gorge and interred 9,000 years ago, was a close match with that of residents still living in the immediate area.

My own paternal ancestors, these days designated as Celt-Iberians (later Britons) arrived at some stage before the Roman legions, when the waters had risen and the archipelago was taking its familiar modern shape.

I've long assumed they took the so called 'Atlantic route' in rudimentary boats, but this map suggests that they just as easily might have walked it.

Posted by Inner Diablog at 5:20 pm

The so-called Jurassic Coast was not then a coast at all and what is now the North Sea became a hot and humid zone of woodlands
One has to wonder about the idea that there are icecaps only a few hundred miles from subtropical fauna. The data is not in dispute, the fossil, artifact and geologic records are determinate but one has to wonder: What caused such a rapid warming period in Northern Europe?

There were really quite severe shifts in climate in the period a few of hundred years either side of Roman occupation. And the fundamental climate divide between SE and W and NW has always been fixed.