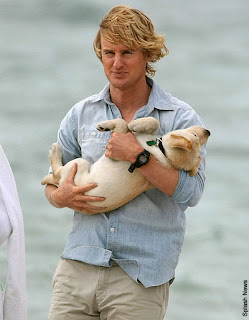 According to Walter Addiego of the San Francisco Chronicle:

"This love letter to man's best friend will make dog fanciers roll over and do tricks. It's so warmhearted, you'll want to run out and hug the nearest big, sloppy mutt."

Funny, I ended up suspecting this movie was designed to make fanciers of the American Dream run out and hug the nearest adorably good looking and successful American family they could find outside...no doubt frolicking in the fake snow.

The dog is something of a side-issue. He doesn't seem to do anything I couldn't have made up myself before I ever had a dog.

At one point John Grogan, played here by Owen Wilson, describes his regular Miami newspaper column, which formed the basis of his best-selling Marley memoirs, as "everyday stuff but funnier" — which is a bit like referring to Eastenders as "everyday stuff but grottier". I'd need considerably weightier incentivies than this movie provides to really bother myself with attempting to draw life lessons from other people's everyday trivia.

It's not that the Grogans aren't a perfectly nice couple, it's just that the unconditional love of a pet animal can all too easily become a mirror for the narcissism of the culture they live in, at least as it is presented to us here by David Frankel.

So, when not numbingly boring, this film is actually a bit nauseating.