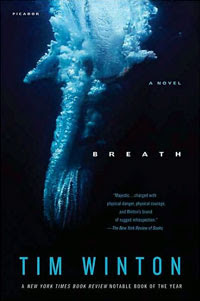 Colm Tóibín has beaten me to it; Tim Winton's Breath is indeed "breathtaking".

Set within a fairly conventional tale of an Australian boyhood (in Sawyer, near Perth in the 70s) Winton's tale explores how the life lived most intensely is one in danger of skirting ever closer to darkness.

It's also one of those stories where the narrator— Bruce Pike aka 'Pikelet' — brings a middle-aged man's perspective back to the time of his life. In fact you could even slot it into Christopher Booker's special category of 'Voyage and Return' plots, in which the protagonist is briefly part of a self-styled elite leading a kind of wonderland existence (along the lines of Waugh's Brideshead revisited and Tartt's The Secret History) only by the end of the story to be cast out, and to a large extent marked for life by this experience.

Surfing is Pikelet's escape from the ordinary. He meets the pathologically risk-averse Ivan Loon aka 'Loonie' — and together they are taken under the wing of former champion Sando and his somewhat messed-up wife Eva. TLS reviewer Rónán McDonald saw something fascistic in the way this little group starts to play with death's rollers:

"If there is a hierarchical, aristocratic aspect to surfing, the deathliness that shadows its appeal in this novel also evokes a fascist aesthetic. The hunt for more and more hazardous waves to conquer indicates an aspiration towards an ineffable, mystic extremity, at once terrifying and swathed in a rhetoric of purity. The blond and buffed heroes of surfing are, after all, in many ways comparable to Übermensch, their feats of daring and mastery of a higher order than those of the “ordinary” people. There is nothing communal about the surfing impulse here."

I still think there's a world of difference between a surfboard and a pair of jackboots, in as much that the darker side of the basic aspiration is not immediately obvious with the former. Winton himself seems to acknowledge that surfing itself can be 'pure' and yet can also bring out the sado-masochistic demons in those already that way inclined.

I quoted one of Pikelet's more striking reminiscences here.

The book has been awarded with the 2009 Miles Franklin Prize for literature and has an excellent support website.