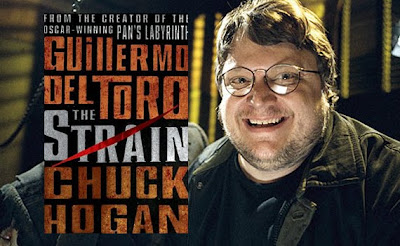 As you might expect from a novel co-written by a highly imaginative film director in his spare time, The Strain is very cinematic.

This is both good and bad news. On the one hand the grammar of the scene-cuts and dialogue is reassuringly familiar and the story is packed with highly 'visual' set pieces.

On the other hand, I'm a slow reader, so taking on a novel which sounds a bit like someone describing the movie they are watching in their head, represents a time commitment of around ten times that of actually sitting in a darkened cinema for a couple of hours.

Philip Pullman famously observed that the thing that gets left out when Hollywood adapts a decent novel is literature. Here, it's what neither author has tried very hard to inject in the first place. Having said that, the core idea — and I suspect that one would have to credit Guillermo del Toro with this — has a certain thrill about it, and Chuck Hogan has executed it competently.

A 777 lands at JFK and then comes to a standstill on the taxiway, having apparently suffered a complete systems shutdown. On board everyone appears to be dead, though once the bodies have been collected and deposited at various morgues in the city, they reanimate as the virus-incarnate of vampirism.

Del Toro wanted to get back to the nasty vampires of old, consciously rejecting the fey romantic male leads of Twilight (and to a lesser extent True Blood). This lot have fast-zombie personality traits with long chameleon-like stingers under their tongues — rather like Ridley Scott's Alien — instead of sharp incisors. Their swarm leader is the freakishly tall Jusef Sardu aka 'the master', one of a group of ancient vampires who have in the past tended not to allow their victims to proliferate.

Yet now, a plutocrat whose wealth is a match for Buffett and Gates, but whose health is failing fast, has assisted the giant bloodsucker in his quest for a transatlantic break....one which will most significantly break the age-old truce amongst the 'old ones'.

As the undeadly plague spreads throughout Manhattan, a small grass-roots team forms to prevent the 'turning' of all humanity: an infectious disease specialist, a rat catcher and a frail old Romanian professor who's had some previous with Sardu in the Nazi death camp at Treblinka.

This is the first part of a trilogy and Del Toro was a little ambiguous about future plans to film the story when interviewed by Simon Mayo on R5. On the one hand he said he was happy to try his hand at the authorial medium, but then later admitted that he'd earlier run the concept by some studio execs who'd been taken by the bizarre notion that it should be done as a TV comedy.

The Mexican director has introduced humour in the Hellboy series, but he is generally quite earnest about the struggle between good and evil, and here, as almost everywhere a thematic link with fascism is developed. The location also allows him to make repeated references to 9-11, with the vampires setting up their own ground zero HQ beneath the WTC site, and to generally stoke up the mood of apocalyptic gloom that makes the story feel rather like a prequel to Matheson's I Am Legend.

It seemed like an appropriate enough read in the lead up to Halloween and, if there's a vogue for vampires right now, there's also a whole load of books about future dystopias and apocalyptic scenarios appearing on bookshelves right now (Such as Margaret Atwood's The Year of the Flood and Fay Wheldon's Chalcot Crescent.) which are no doubt telling us something interesting about the inverted-escapism of the economically depressed.
Posted by Inner Diablog at 8:16 pm