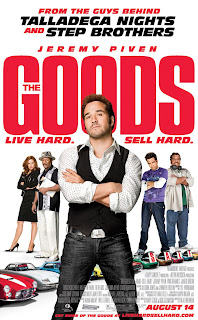 We both suffered from laughers' remorse after watching this unapologetically crude comedy last night.

In format it's not unlike Employee of the Month, with a few nods back to Airplane....and perhaps even stuff like Stir Crazy.

At least with Judd Appatow's output one can console oneself with the idea that the gags are targeted at younger, less mature audiences, and there's always a padding of sentimentality to cushion the repeated blows of on-screen vulgarity.

Not so here. This is grown-up smut, delivered with the shamelessness of the car salesmen who tells you he's throwing in the dust mats for free.

There are plenty of chuckles though, most of which erupt spontaneously out of the moments of sheer, undirected ridiculousness.

Posted by Inner Diablog at 6:21 pm