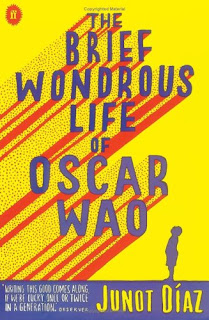 "Success after all loves a witness, but failure can't exist without one."

A winsome bit of writing this; its wondrousness as a piece of fiction constrained only by the limitations set by its own stylistic conceit.

A second generation member of the Dominican diaspora, Oscar Wao is an overweight kid whose 'nascent pimpliness' in adolescence quickly gave way to the kind of chronic toto-lessness that comes with a dedication to the genres. And as well as the inevitable afflictions of the nerd lifestyle Oscar's misfortunes are tragically compounded by the workings of an old island curse on his family - the fukú .

While Díaz's prose is certainly of the high octane variety throughout, at times the vehicle it fuels begins to look like a bit of a crate. I admired the alluring blend of Macondo and McOndo for the first hundred pages or so, but then a bland, multi-generational Isabel Allende-style saga starts to poke through rather intrusively.

Even the 'voice' which gives this Pullitzer Prize winning novel most of its dazzle has a couple of shortcomings. It becomes clear that Oscar's 'watcher' is his sister's on-off boyfriend Yunior, a more typical specimen of Dominican male (one 'fly bachatero') who yet appears to share much of Oscar's sci-fi and fantasy scholarship as well as his penchant for writing. Yunior acquires some shape as a character in the story, yet remains somewhat artificial and underdeveloped, and we never get closer to Oscar's inner world than Yunior's effervescently sincretic vocabulary allows us. The brief switch to narration from Oscar's sister also struck me as a structural anomaly.

Maybe, having just finished Murakami's novel, I was hankering after a more gossamer touch.

Díaz has a couple of swipes at La Fiesta del Chivo, until now the most high-profile treatment of the Trujillato in Latin American literature. My admiration for Vargas Llosa has been tempered of late by his predisposition to stick his pronounced Peruvian nose into Guatemalan politics, but his is still perhaps the better novel.

Still, the introductory chapter of this book — "no matter what you believe, fukú believes in you" — is something of a mini-masterpiece. And anyone who spend any time in the 80s behind a DM's shield is bound to feel very much at home within the cultural references of the wider text, which, in spite of its often facetious tone (who am I to criticise here..?) delivers some pointed insights into both tropical tyranny and immigrant experience.

Posted by Inner Diablog at 6:14 pm