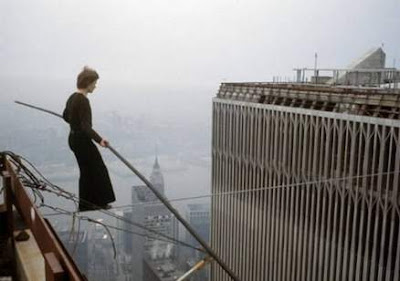 Last week he came charging down the aisle to share in Oscar glory, and didn't leave the stage before balancing the statuette on his chin.

Not once is the fate of the towers mentioned in James Marsh's award-winning Storyville documentary, but there's no doubt that they have added their enduring visual poignancy to Petit's glorious moment, saving it from evanescence, and perhaps even locking it down as an uplifting counterpart to Bin Laden's furiously nihilistic piece of theatre.

Particularly striking are the 'inverted ground zero' sequences showing the towers as two deep-set square troughs in the Manhattan soil, as the first steel girders are set in place.

Petit had had them marked down as the future scene of his pièce de résistance, from the time they were little more than a sketch in a French newspaper.

Even without the shadow of 9-11 it's already a very moving story; the emotions still surprisingly raw after so many years. Marsh milks this for all he can, burnishing archive footage with bittersweet pieces from Eric Satie and Vaughan Williams. There are parts too which outdo Danny Ocean's capers for sheer excitement.

Must read the book now...

Posted by Inner Diablog at 7:57 pm