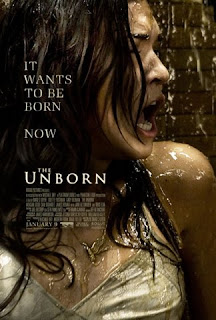 V's niece Amy has different-coloured irises: a rare heterochromia that I have always taken as a charmingly unusual trait, and not indicative of anything nefarious.

Here we're told that it often means that an individual swapped genetic material with another fetus in utero, and that in this case the twin that got itself strangled on its sibling's umbilical cord wants both revenge for that particular misadventure and a chance of life for himself.

The story hits the ground running with this fairly simple premise, but around a third of the way in we learn that this stifled being has a whole load of additional issues it needs to work off.

It's as if the film has suddenly gone down with horror-genre AIDS and becomes infected with every unpleasant Western and Asian chiller meme that's out there. The result, a complete chirmolazo, with a damnable tale of vile Nazi experiments at Aushwitz at its dark and kitschy heart.

When the basketball-playing black reverend turns up you are half expecting it to be one of those Wayans dudes from In Living Color, thus confirming the whole thing as an overlaboured spoof. In the end the best laugh I got from The Unborn was at the moment Gary Oldman's Rabbi makes an unexpected reappearance having miraculously gathered together all the scattered pages of his copy of The Bluffer's Guide to Jewish Exorcisms.

Odette Yustman, herself a medley of Latin ancestries, should be lovely on paper at least, but on celluloid she is smoulderless, experiencing the loss of most of her friends and family (her father does well to keep away after the half hour mark) with a more or less fixed expression...de huelepedo.