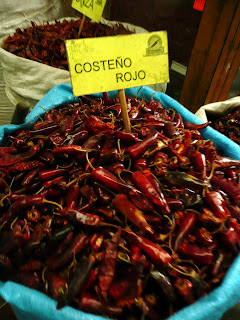 There was a piece in the Times today about how cops in the southwestern Chongqing region of China (the nation with the world's worst traffic accident record) have been serving drivers dried chilli peppers to prevent them falling asleep at the wheel. Each has been asked to consume 1.5kg (3lb) of this unique anti-sedative.

I cast my mind back to another recent article in Guatemala's own Prensa Libre which claimed that the chapines aren't doing enough — and certainly not as much as their northern neighbours, whose chillis are seen here — to promote their extensive natural resources in terms of the genus capiscum.

Guatemala produces 2000 metric tons of chillis annually, compared to 1, 855,610 in Mexico and 11,534,871 in China. The country can claim 32 varieties (which reminds me of the chilli-flavoured ice-cream in Oaxaca), the most famous of which is the Chile Cahabonero, commonly known as the Cobanero. The industry also provides work for almost 300,000 jornaleros here.
Posted by Inner Diablog at 5:30 pm