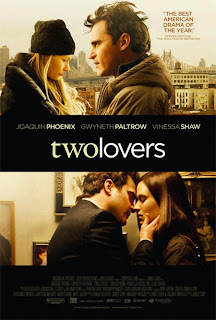 James Gray's mesmerising film is set in Brooklyn, but it's unmistakeably Eastern European in its sensibility. The influence of Kieslowski (A Short Film About Love and other pieces from the Dekalog) is palpable.

Gray's grandparents were Russian immigrants. His protagonist here, Leonard Kraditor, is the son of middle-class Jewish immigrants whose cultural level extends beyond their socio-economic clout.

Leonard is on heavy meds after his fiancee's parents called off their engagement after they had both tested positive for the gene underlying Tay-Sachs disease. Incidents of self-harm and hospitalisation had followed, and at the start of the film he's living back in his old bedroom and flirting with suicide.

Two romantic exits from these physically and mentally cramped circumstances then present themselves. First there's Sandra, the nice Jewish girl Leonard's parents are plugging for, who also happens to be the daughter of the man about to merge with the family dry-cleaning business.

In spite of the fact that she cites The Sound of Music as her favourite movie, Sandra has an aura of deep sensitivity. But rather than being looked after Leonard would like to be the looker-afterer, and has just met the perfect foil for these inclinations in his neighbour Michelle, a drug-using ADHD sufferer with a wealthy married boyfriend who pays for her apartment.

In the latter role Gwyneth Paltrow is good, but not quite as good as Joaquin Phoenix and Vinessa Shaw are as Leonard and Sandra respectively. (Phoenix's handling of Leonard's body posture and his different moods in different company is especially acute.)

Perhaps the problem is less her acting ability than the fact that Michelle is clearly more of an archetype, but then so is the meddlesome Jewish mother played by Isabella Rossellini and the script seems to have been more discriminating in the realisation of that character.

While Gray deploys a neat visual trick to quickly communicate how Leonard and Sandra's relationship has deepened over the course of a few weeks, we both felt that the bond of confidence between Leonard and Michelle was being fast-tracked somewhat.

But there's no denying that this is an extremely adept piece of film-making. The narrative is deeply serious but there are multiple moments of implicit comedy, always a sign in my view of skillful writing. And on three occasions Leonard is left alone with another character and on each of them the writers confounded our expectations about what that character was about to say to him.

How could this have missed out on award nominations?