Trip Pic of the Day 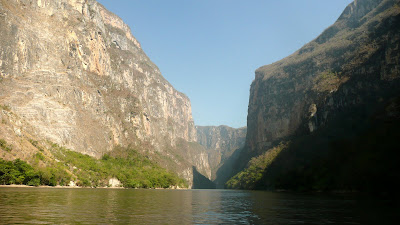 It was lure of the Cañón del Sumidero that had drawn me up into Chiapas originally, though it ended up being my final stop. This particular view of it features on the state escudo (shield).

I'd arrived at Tuxtla Gutiérrez just before dawn and wasn't due to catch my next bus until 22:15, so a boat tour along the Rio Grijalva - through the canyon and up to the Manuel Moreno Torres hydroelectric dam, and then back again - was a fine way to burn up some of those hours.

There were still quite a few left when I got back to the terminal, so I was pleased to discover that it backed onto a smart new mall. This isn't a side to Mexico that the Rough Guide encourages its readers to look for. A temple of generic international consumerism comprising Starbucks clones, endless casual-wear emporia and fast food outlets galore, plus a multiplex cinema, where I took myself off to see Operación Valkyrie.

I imagine that this place might be more than a little disconcerting for a certain type of gringo visitor — a world turned upside down, where the duskier underclasses have been mysteriously afflicted with a chronic strain of affluenza. Think perhaps of a gun-totin' Charlton Heston as astronaut Taylor, stressing about how long it will be before they come to wrench the pizza slice out of his cold, dead hand.

After the movie I was gripped by a powerful Cheesey Bread antojo, and after presenting my last few pesos I was presented with a little device featuring a picture of my order which vibrated enthusiastically when it was time for me to return to the Domino's counter to pick it up.
Posted by Inner Diablog at 4:37 pm