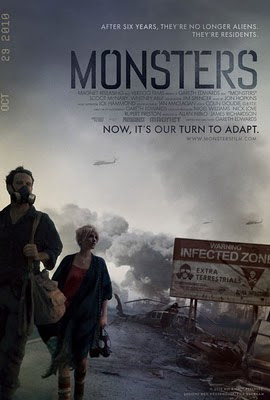 The big interest here for us was of course the fact that the movie was largely shot 'on the run' in Mexico, Costa Rica and Guatemala. Several black-clad PNC amateur thesps put in an appearance and in one scene shot at the Petén frontier no effort has been made to obscure the sign saying Salida de Guatemala.

Which is a little odd, because this geographically-scrambled road trip is supposed to be taking place in the parched northern deserts of Mexico. Yet there's hardly a cactus to be seen here; in fact the jungle (and the Mayan ruins) run right up to the border with Texas.

Fortunately the cognitive dissonance this creates, along with the basic premise — that a returning NASA probe crashed landed south of the border six years ago infecting the area with an alien species of giant glowing cephalopods which hatch every six months or so and have to be controlled using hellfire missiles and other airborne ordnance — doesn't spoil one's appreciation of the rather more diffuse set of ideas that the film is really about.

Monsters was written and directed by British documentary-maker Gareth Edwards, who also did the cinematography and visual effects. It is in essence a mood piece, a rather trippy take on the trip he and his little cast and crew made across Central America recruiting locations and extras as they presented themselves. The impressive artfulness of Edwards's visuals contrasts strongly with the apparent artlessness of the script.

Now you might think that a more structured and polished screenplay is one production cost which might have been added without shunting the movie out of the low budget category, but there's a disarming candor in this non-fiction specialist's approach to dialogue. Sam and Andrew are in some ways the classic mismatched road movie pair-up, yet their interactions defy expectation in a number of ways. Specifically, unlike most movie characters they seem blissfully unaware of the need to emote in ways which resonate with and ultimately manipulate the emotions of the viewing audience. They don't scream when we think we would, they don't even ask the obvious questions of their predicament we think we would, and I found it hard to chalk this up alongside the movie's other minor faults.

Andrew O'Hehir at Salon described Monsters as Predators meets Sin Nombre. We felt it was could just as easily be described as Cloverfield meets Y Tu Mamá También. The genre-bending has been handled in a low-key, less knowing way than one has become accustomed to i.e. it's more like the subtle androgyny of the vampire girl in Let The Right One In than full-on Rio de Janeiro ladyboy!

The subtext, such as it is, is similarly submerged. At one point I spotted some graffiti on a wall decrying the 5000 deaths which had needlessly resulted from the combined US-Mexican armed response to this extraterrestrial 'infection'. This is roughly one sixth of the total death-toll from the 'War on Drugs' which has raged in more or less the same zona de cuarentena in northern Mexico these past three years.

I'll be watching this very soon...