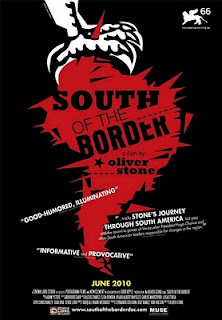 In this documentary, written by Tariq Ali, but essentially presented as the work of Oliver Stone, the renegade film director meets the bane of Fox News and NTN24 and attempts to get beyond the big American warning sign saying 'dictator'.

Chávez is shown as the leader of a popular rebellion in South America which has chosen as its targets American IMF-led imperialism and predatory capitalism in general.

The most exposition-heavy parts of the movie look at the 2002 coup-attempt in Venezuela and the US role in this. The failed golpe is held up as a credible explanation for Chávez's subsequent bolshiness and authoritarian tendencies.

Stone then goes on to meet several other South American leaders including (poignantly) the Kirchners, as well as Evo, Correa, Lula, Lugo and the younger Castro, all of which are presented as the support crew for Venezuelan-led Bolivarianism. Strength in numbers is the new circumstance of South America's new anti-elite, Stone suggests.

Now, standing up to US bulleying is probably a good thing. But the makers of this film have clearly fallen into the trap of suggesting that many of the significant issues facing the region — poverty, development, impunity, drugs, political freedom — are all somehow just the effluent from a misguided US foreign policy. This smacks of American exceptionalism in its reversed-out, leftist guise.

The end result is a movie which isn't really interested in the particular local narratives and their considerable variation across the spectrum of Bolivarianist indignation. The target market for the film is clearly the mass of open-minded but ignorant Americans who might otherwise be wondering if Evo's breakfast habits mean they can get a real high from their morning cocoa. It's a shame that it presents an essentially fair, but still rather partial view of the 'revolution' taking shape in the bottom half of the hemisphere.

That said, fans of larger-than-life Hugo — especially those like myself who are more inclined to question his political achievements on the ground — will enjoy this unbalanced movie primarily for the portrait it provides of this sincere if occasionally oafish Presidente.

I particularly loved the part where Stone encourages him to ride a kid's bicycle around the site of his childhood 'mud hut', and when said bike duly crumbles depositing his large frame into said mud, Chávez jumps up with a nervous laugh and exclaims "oh no, I'll have to pay for that!".

Posted by Inner Diablog at 5:09 pm