A detail from Little Denise, 1889. One of Theo Van Rysselberghe's first stabs at the puntillismo technique, which he adopted after seeing the works of Seurat, adding his own blend of emotional expressiveness with the strikingly delicate rendering of the face of his six-year old niece Denise Maréchal (1883-1956) — later Madame George Béart. 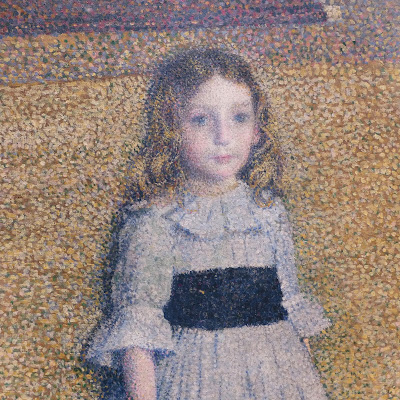 For how long did little Denise have to hold that pose?

I recently came across a passage in Katie Kitamura's Intimacies in which the narrator describes some reflections on "temporal blurring" at the Mauritshuis.

For if photographers are mostly looking to capture stuff between the lines, the painter usually has the subject before them for longer (though some work from photos these days), allowing the brush to yield the lines themselves. This is why I find it rather drôle when snappers self-consciously pose as poets of the visual, for the layering they attain is nearly always an artifact of the technology — as the lens itself typically 'sees' only the thinnest of instants.

Kitamura suggests that one can "feel the weight of time passing" in a portrait posed for during the pre-photographic era. "I thought that was why, as I stood before a painting of a young girl in half-light, there was something that was both guarded and vulnerable in her gaze. It was not the contradiction of a single instant, but rather it was as if the painter had caught her in two separate states of emotion, two different moods, and managed to contain them within the single image.” 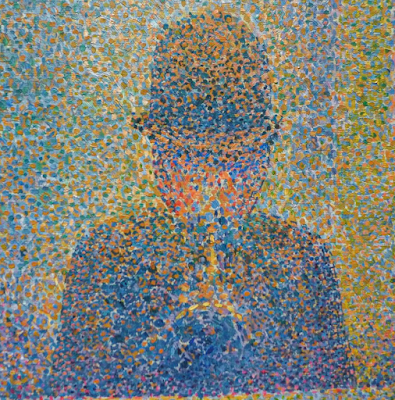 Seurat himself was always a bit more hardcore in the broken brush mode. This is a close up of one of the company from Parade de Cirque (Circus Sideshow), his first nocturnal scene, painted a year or so before Van Rysselberghe's niece (see previous post), during 1887-8. Back in 1986 I came across a French artist based on the Côte d'Azur who was still banging out a pastel-paletted, pointilliste pasticcio for the comfortably and obscenely wealthy — Serge Mendjisky. 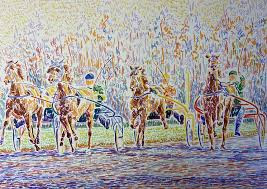 At the time I was holed up for the summer in a rather fabulous gated community west of Cannes called Port La Galère, laid down by architect Jacques Savin Couelle, a guest of a family friend who was acting somewhat informally as both patron and a sort of agent to said Serge.

She possessed a Renoir above the fireplace in her London home, not in fact the real deal, but a bona fide hand-painted facsimile, which hung there in lieu of the original, which she owned, but habitually sat inside a sort of airtight safe off-site.

Her father had been quite the collector, and not just of the more moveable kind of assets. You could say he played Monopoly for real, having once owned Piccadilly Circus.

She had several little 'projects' around the Riviera, many of which were perhaps more deserving than Serge, but she had a genuine fondness for his doggedly nostalgic style, even if she had once observed mischievously to me that he painted for people who couldn't afford a real impressionist, which at that precise moment in time tended to mean people who were not Japanese. Google him and you might see what she meant. (Two examples here, above and below.) 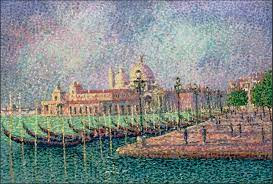 I had in mind that Serge passed away many years ago, but when I looked him up myself today I discovered that he left us in May 2017.