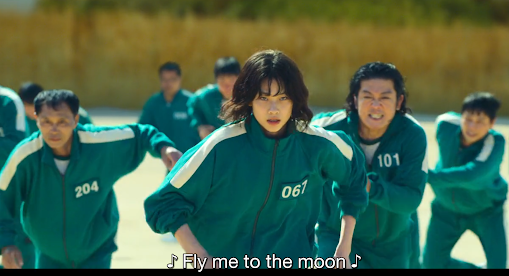 A television landmark for sure. Though it perhaps suffered from a minor frailty that I tend to associate with reality TV competitions in general, such as Big Brother, along with tentpole tournaments like the FIFA World Cup — they are perhaps never more compelling than in their earlier phases when a more or less complete complement of competitors remains.

For me this show peaked around episode six (marbles), the equivalent perhaps of the last round of the group phase, where the stakes were suddenly strikingly elevated, along with our awareness of possibly losing players we had come to care about.

It has to be said that by then we had already pre-twigged the two twists that would be served up in the penultimate and concluding episodes, but that didn't significantly erode our engagement.

It has to be said that the non-Korean 'VIPs' were handled in a comparatively unskillful way.

There are perhaps just enough unanswered questions to make a second season viable.

Game one — red light, green light — was perhaps the most iconic and the scene had an added edge for me as Fly Me To The Moon was surely my mother's favourite Sinatra song, and I had the instrumental version by Oscar Peterson played at her funeral. The one used here is an oomphed up production of this...

Posted by Inner Diablog at 3:41 pm