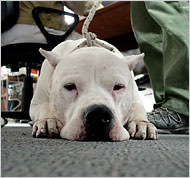 Many of the Argie films I've seen have been about city folk and their daily quest to be taken seriously as people of the exterior. This one is very much about the people of the interior.

Perhaps what appealed to me most here was the way that almost every character that Villegas runs into on his road to renewal is immediately engaging. It's as if the tale of this man and his dogo is just one patch in a larger quilt of personal truths populated by appealing Patagonians with their own unique stories: the widow that gives Villegas Bombón/Lechien as a reward for fixing the fan-belt on her Mercedes, the beaming young girl in the service station that hands him a winning promotional ticket, the woman that sings Arabian songs phonetically, the teenage couple at the end heading north for a better life in Buenos Aires - none are incidental. I felt at once that I wanted to know more about each of them.

Juan 'Coco' Villegas is a man who appears to have used up his store of options. Laid off at 52 after two decades of labour as a light mechanic at a service station, he's a barely welcome guest at his daughter's home and is having little luck selling hand-crafted knives. The unexpected acquisition of a new companion, an Argentine dogo sired by a great champion, immediately cures him of his ingrained invisibility. Of course at first it's really the dog that people are noticing, but some of this canine value soon starts to rub off on the owner. An apparently doomed spectator is transformed once more into a player.

The inhabitants of trenchant landscapes like Patagonia are often contrastingly soft at heart. The moment in the movie which most touching captures the truth of these good-natured interior folk comes when Juan drives off from the petrol station wearing his new Men in Black specs; "como en la televisión," he later tells his daughter.

This film will move most sensitive sorts, but not in a heavy-handed Hollywood sort of way. Sorin's neo-realist documentary-style storytelling is based on using non-professional actors, and as I noted above, the effect is attention-grabbing. Juan Villegas is played by a man of the same name, himself a twenty-year veteran of garage attendance − so perhaps the expression on his face when everyone claps him at the dog show reflects a genuine surge of self-esteem. Sorin also insists on shooting his films in chronological order.
Posted by Inner Diablog at 6:28 pm