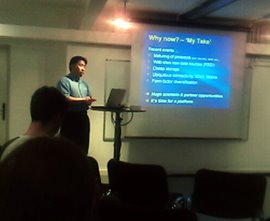 A few weeks ago I went along to the second Windows Live blogger session at Westminster Kingsway College, hidden away in the grottiest part of Soho.

The average age of the group has gone down a bit since the first gathering back in January. This time it looked like the majority of attendees were budding young developers and the show was definitely pitched at their interest and experience level.

Along with Phil Holden came Koji Kato, Group Program Manager for Windows Live. Koji gave a presentation on the latest gadgets and did some 'live' development, which reminded of the heady days when I used to sit beside to Christofer as he coded away in Visual Basic.

Koji wants to take development to the masses. He showed us how easy it will be to set up a 'bot' as a Messenger contact − so for example, you could ask a question of Encarta ("what is up with Ronaldo?!") and get the answer back as part of the Messenger session rather than having to do a more formal Web search. He also quickly coded-up and demonstrated a search tool that could recognise handwritten content and in which the keyword priorities could be managed by dragging text around the screen. Would seem to work best on a tablet PC.

Koji also showed the group how you can use live.com to associate your digital photos with particular geographical locations (using maps), and reflected that it would be great if a future generation of cameras were able to automatically encode the images with GPS data.

These meet-ups have been organised by a French online marketing agency (with a blog-form website) called Heaven.
Posted by Inner Diablog at 9:17 am