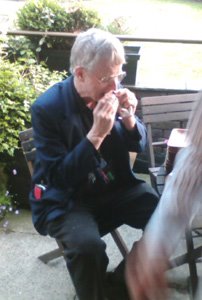 Had a great time on Friday night at Frode's birthday barbecue. Ted was on excellent form:

"The Web is a dumbed-down version of something I came up with in 1968."

(Hey, I'm also a dumbed-down version of something someone came up with in 1967! )

He then gave a demo of his latest alternative hypertext environment- Floating World.

Earlier he told me that he knows Jaron Lanier from his Sausalito days and that the dreadlocked demagogue is generally known as "Mr Virtual Reality; though freely admits that the phrase was originally coined by a French film director (not however mentioned in this entry.)

The next morning I learned that news of The Crouch had reached Guatemala!
Posted by Inner Diablog at 8:53 am