In The Electric Mist 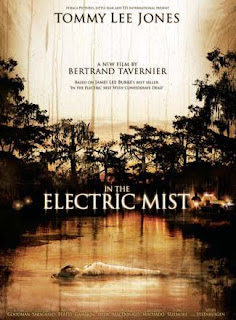 I've yet to make my mind up about Dave Robicheaux. Before heading off to Mexico I listened to an audio-book version of The Tin Roof Blowdown, which featured a whodunnit plot as convoluted and ultimately unproductive as this one. Yet made it completely compelling was its setting in the chronically-apocalyptic conditions of Katrina-ravaged Louisianna.

These stories seem to work best if you spare little thought for the 'victims' and focus on the character (and voice) of meandering detective Robicheaux, the atmosphere of Iberia Parish and the uniquely American eschatology which underlies their confection. (Blake's tiger is Robicheaux's chosen metaphor for prowling evil.)

In The Electric Mist has a great cast and nobody does the backwoods lawman better these days than Tommy Lee Jones. Perhaps the stand-out performance though comes from John Goodman as colourful local hood Julie 'Baby Feet' Balboni. Given that many of the characters have evolved across a series of novels, veteran French director Bertrand Tavernier has done a fine job of establishing them here.

And the Kromolowskis' screenplay has constained some of Lee Burke's tendency to over-blow both dialogue and description (the narrator's lines are not especially purple for instance.) However, "...with confederate soldiers" might have been from the title, Robicheaux's surreal encounters with the rather grubby rebel General John Bell Hood have been retained and my suspicion is that they would work a little better on paper.

Although the ending was a little flaccid, and the final scene less of a nod to The Shining than face-first dive into a bowl of gumbo to The Shining, I was oddly enough left with a desire to watch the whole thing through from start to finish again.

Good review. I actually never have a clue what's going on in his novels, plot-wise...I just drink in the atmosphere.