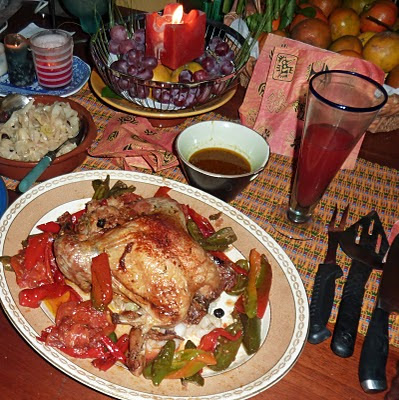 "Si no hago tamales, me pongo triste," reflected the lady at the local finca as she waived all charges for our usual order of tomate, pepino and chile pimiento. The instinctive generosity of so many people around here is one of the most cheering features of Christmas in Guatemala.
V isn't into making tamales herself, but we were soon unable to complain of a shortage as a series of neighbours knocked on our gate in order to render up some of their own surplus. Best of all were the tamales (negros and colorados) gifted to us by Doña I, our local shopkeeper. (A host of other goodies have been presented to us by friends, family and nearby residents.)
There's a sense here today that we are in the eye of this seasonal storm of over-indulgence — well, some of the relatives have piled off back to Guate and won't be returning until Wednesday — so, a moment perhaps to reflect on the comestibles that have left the largest impression thus far:

V's chimichurri-style salsa made with capers, two kinds of basil, cucumber and a smattering of chopped peppers — The seemingly endless chocolate, strawberry and vanilla cake from La Cenicienta — Doña T's enormous pierna of pork with her homemade chile sauce — The pepián and rice yesterday at Villa Clarita — The red and white candy bastones which stick in the teeth like Brighton rock — And all the wines.

I even found myself drinking New World chardonnay at one stage. I thought I'd stocked up enough vino to last us through to the 4th, but supplies have been depleted faster than anticipated, and a further trip to Tabacos y Vino before the weekend may yet have to be called for.
It's a pity that pine needles aren't so freely available in the market all year round, as I am getting used to the new floor covering in the downstairs loo.No shortage of pine trees around here of course, but only Osli has much of a chance of reaching their lower branches.
Posted by Inner Diablog at 5:53 pm

We get tamales every Christmas from a little Guatemalan joint in DC...as always, they're excellent. But pepian is a little harder to come by.

In less than 48 hours we'll be wandering around Zone 1 and decompressing from the flight. Can't wait to hit the Parque Central and see what the vendors are offering...