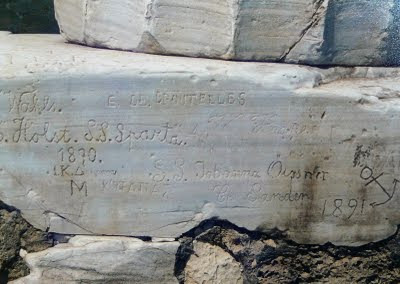 Assorted graffiti carved by nineteenth century sailors on the capital of one of the columns of the Temple of Poseidon (5th century BC) at Cape Sounion, a few hours drive south of Athens.

Byron too inscribed his name on the temple but I couldn't find his mark. I tried and failed again when I returned to the cape in the autumn of 1995 whilst working on the online component of the Athens 2004 Olympic bid.

Nothing could really beat the all-nighter pulled in '85, when I watched the sun sink behind the temple, then stayed up to watch the stars arc across the night sky before daylight came up again behind them.