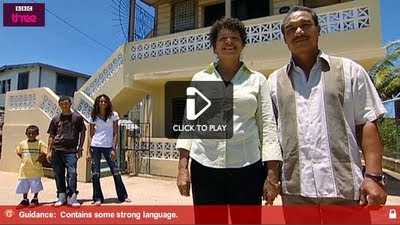 This is the only episode of this series that I've tuned into and but I can't imagine there can many pairs of British teens more suited to exportation to the developing world...in this case Belmopan, Belize and the home of the Perez family.

Calvin and Rosie are soon pulling all kinds of strops as the discipline and worth ethic of their hosts is applied. A tipping point of sorts is reached when Mrs Perez threatens to tip them both outdoors, mattresses and all, unless they hand over their fags.

The BBC of course can't afford to be sued by the parents of reality TV participants with avoidable malaria infections, so the 'larning experience' proper seems to kick in from then on, with both teens appearing to have their perspectives rearranged by a stint at the Liberty foster home.

The programme suggests that its that much harder for children who have been abandoned by their natural fathers to learn respect for authority. It also reminded me of many of the reasons why I have come to admire the core values of the sociological midrift of our neighbouring nation.