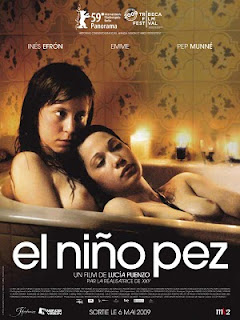 This one kicks off a short season of reviews of some of the movies which featured at the 8th Discovering Latin America film festival in London, which concluded a few days ago. (Special guest directors included Amat Escalante (Arg), Alfonso Cuarón (Mex) and Jorge Navas from Colombia.)

Anyone with fond memories of the sapphic pop exploitation phenomenon that was t.A.T.u will be off to a head start with Lucía Puenzo's The Fish Child. (Not gonna get us...) Don't worry if you missed out on the Russian duo because you can play catch up by staring at the film's promotional poster here.

Judge's daughter Lala has a thing for La Guayi, the family's Paraguayan home help. (So too in fact does her father and just about every other male in the story.) The interlaced chronology fills us in pretty early on that the pair have been sharing bedtime and bathtime and, in spite of judge Bronté's many enemies in corrupt Buenos Aires, are the most likely suspects in his sudden death by poisoning.

The rather odd grade I've given the film reflects that from a base position of ordinarily interesting (and certainly never uninteresting) it at times surged towards the truthful while at others it retreated back to the terrible.

There's hardly a bloke in the tale who isn't in some way a cynical abuser, and the dialogue is almost uniformly of the it must be deep because it's stulted kind. Yet there's more to this than a simplistic, right-on feminist take on class and gender transgression. because the motivations of the Guaraní maid retain their mystery in spite of Puenzo's efforts to serve up some explanation at the end.

Posted by Inner Diablog at 1:28 pm