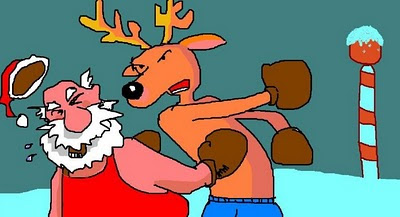 Boxing Day, the day after Christmas, is the secular version of the Feast of St Stephen, observed in the UK and the Commonwealth...and Germany, for some reason.
Back in the middle ages this was the day that the rich offloaded some of their spare stuff on the poor. It's modern name may derive from the practice of Victorian England's better-off of packing up stuff in boxes to give to their household servants and other labourers who had provided them with services during the year.
I have also read that 'Christmas Boxes' were carried on ships setting sail on long and difficult voyages during the age of exploration. Crewmen wishing to ensure safe passage would drop coins into their ship's box, and upon their return would hand it over to a man of the cloth who undertook to keep it safe until December 26.
When I was growing up it was the traditional time for a family outing: to the theatre or for lunch in the countryside. These days most Brits are likely to direct these outings at the first of the January sales which kick off before the turkey has been properly digested.
For now and the foreseeable future Boxing Day will also be associated with the Asian tsunami of 2005, surely the most terrible event which occurred in the decade we are about to leave behind.
V and I were here in Antigua then, but had backed out of a Christmas trip to Thailand at the last minute. We'd most probably have been in Bangkok or on the side of the peninsula spared by the waves, but thoughts of what might have been are sobering, and we knew of several people who were caught up in it, including one who made the fatal error of running onto the beach at Khao Lak to investigate the mysteriously receding shoreline. There were numerous programmes on TV yesterday commemorating the fifth anniversary of the tsunami. We were frankly amazed at how thoroughly the people of Aceh have reconstructed the cultural and commercial life of their province.
Posted by Inner Diablog at 5:01 pm