Next time anyone catches me in 'things ain't what they used to be' mode, just hit me over the head with an unripe papaya, please.

I suppose I've been as guilty as anyone in this respect, but there's been such a torrent of bogus nostalgia around Antigua recently, that I've begun to listen to myself a bit more intently in order to avoid sounding too much like one of those patronising out-of-warranty globetrotters who likes to go on about how Guatemala was marked on rough-edged gringo maps with 'There be dragons' as recently as a couple of decades ago.
V brought my attention to the problem after reading this this piece in August's Review. It comes as news to her for example, that she grew up 'a world away from civilisation'. She was teaching computation here in Antigua when we first met back in the days when the adventurous Mr Heaton first arrived.

Those were the days when Banana Republic still sold clothes worthy of the name, and you could easily kit yourself out with one of those multi-pocketed padded waistcoats that photographers like to wear in combat zones. That said, V also finds it hard to locate the 'appealing edge', even in retrospect, of a civil war in which thousands perished quite needlessly.

Still, things must have been appealingly primitive on other levels, mustn't they? There was of course no Internet back then in Guatemala....but nor was there in the States, for that matter, unless you happened to be a major player in the military or in an academic institution.
Leaving aside the singular piece of self-regarding gringo bilge that is "Antigua exuded a culturally authentic sense of place", are we right to pine for some sort of vanished arcadia, long since unmindfully overrun by an assortment of crass Johnny-come-latelies and lowbrow retirees clutching blueprints for their Miami-colonial mansions?
I seem to recall that there were actually MORE backpackers in the eighties, largely because Spanish schools existed in greater number and the Quetzal was pegged to the Dollar at 2:1.

Many of them were no doubt gringos of the sort who imagine that getting a passport and coming 'south of the border' to a place vaguely close to where mass murder was being committed, qualifies them as some sort of latterday Ernest Hemingway. That the end of the killing made this area less attractive to the itinerant kudos-seeker is a change that can surely only be welcomed.

I also seem to recall that there were ways of acquiring a Toblerone without having to wait for someone to mail it to you, notably that little shop on 6a Avenida Norte. As for other delicacies, it depends how many things you inisist on cramming into that category. El Único was literally unique in that it represented the closest thing Antigua then had to a delicatessen. (The Bodegona was still a night spot called the Manhattan.) and one relied on another store (Aylin, I think) on 6a Avenida Sur for the better wines and spirits.

Sushi bars were thin on the ground here then, as they were almost everywhere else outside Japan, but Quesos y Vino, La Fonda, La Cenicienta etc. were all up and running by the end of the decade, as was Revue magazine itself.
Commercially Antigua was certainly a little quieter. The Casbah hadn't opened on the Quinta and the cathedral and the chapels along the Calle de los Pasos were in need of a lick of fresh paint. Meanwhile damage done by the '76 quake was still passing itself off as the ruination bequeathed to the city by the much more ancient — and thus perhaps more romantic — Santa Marta terremotos.
Anyway, I came across this handy global map of 'touristyness' earlier today, which should help redirect those sensitive souls who find de-authentification almost as disturbing a symptom of globalisation as deforestation. Tip: New Zealand is still looking comparatively undiscovered. 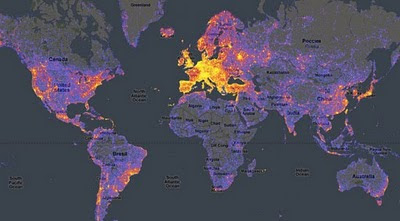 A world away from civilization! Like V, I too am surprised by this. Unless you define civilization as having a McD´s at every corner, I would think that having Spanish groups performing zarzuelas at the municipal theater in Xela at the beginning of the 20th century or a university that dates back to the 17th century counts as civilization. But then again, if you tend to think that "the Bible was written in American, just go to any motel in the US to see that´s true", as comedian Carlos Mencía says, then, no, we didn´t have any civilization 30 years ago.
Plus it must´ve been lots of fun to watch the Civil War from the sidelines, where your friends and relatives were not getting killed.