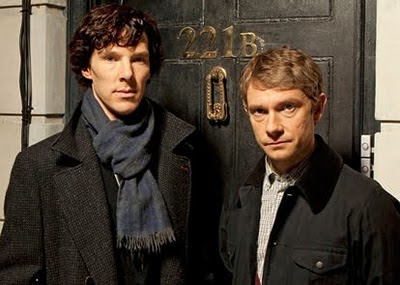 In his time off between Doctor Who seasons Russel T. Davies gave us Torchwood. His successor Stephen Moffat will be keeping us entertained during the break with Sherlock, in which Conan Doyle's much loved characters have been chrono-shunted into early twenty-first century London.

Methinks this is a format that will go down a little better across the pond than 'oversexed alien-chasers in Cardiff.' Indeed, Sherlock may in a sense be what we get instead of Captain Jack and his (now mostly dead) merry crew.

As the eponymous freelance detective, Benedict Cumberbatch charges around in a long overcoat much like that habitually worn by John Barrowman in Torchwood, and it's hard not to characterise this version of Holmes as what you'd get if you merged Jack Harkness with the last of the Timelords, with a side-effect of the process being that this new TV persona comes out as a 'high functioning sociopath'. (whilst retaining a propensity for casual sexual encounters even less pronounced than the Doctor's.)

Anyway, this is a great new series and confirms my opinion of Señor Moffat as possibly the best writer-producer working in British television at the moment. I can't understand why he hasn't already buggered off to LA. He's using up an awful lot of really brilliant ideas on the small screen.

This is a Sherlock Holmes who has few friends and barely functions in the modern urban world, and yet maintains a website called The Science of Deduction and has a comprehensive understanding of neoteric gadgets (including the particular marks that drunks leave on the side of their mobiles when plugging in the charger.) The series may have a zippy modernity that bares comparison with the various CSI productions, yet Moffat has cleverly brought forward enough of a Victorian aesthetic into contemporary London crime-fighting that Holmes and Watson don't appear as two fictional characters adrift in this new temporal setting.

All in all, superb, and a great pity that there will only be four episodes in the first season. They might actually have cut these up a bit more, because the first two have seemed just a little overlong. (90 mins.)
Posted by Inner Diablog at 4:34 pm