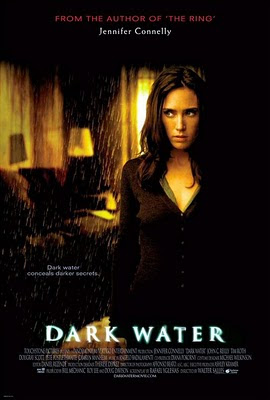 In the middle of his recent radio review of Hierro , Mark Kermode referred to Dark Water as one of the best horror movies of recent years.

He didn't however specify whether he meant the Hideo Nakata original (2002) or this one, the Walter Salles remake. (A little bit of googling reveals that it is in fact the Japanese film that he regards as 'underrated' and 'genius'.)

Perhaps it was a good thing that V and I had both forgotten enough of the detail of the first version to experience a degree of freshness in our encounter with this one. I do nevertheless recall that Nakata's Dark Water tended, like almost all Japanese horror, to the overwrought, and that it certainly didn't pull any supernatural punches.

Salles, as one might expect, is more interested in what we might call the underlying sociological terror, so that his apartment block on Roosevelt Island is not just a suitably creepy location, it's a brutalist statement about loneliness and alienation in the metropolis and the fragility of family life (a theme he fleshes out in the semi-comic personas of the lawyer and the estate agent).

Although there are enough watery effects to generate what I'd call moderate scariness, Salles also appears to be attempting a retroactive Henry James on this material, in order that the audience might be capable of constructing a non-supernatural explanation of events. (Something the Japanese would nver bother to do of course!).

So, as an in-your-face shocker, the Brazilian director's version appears somewhat blunted in comparison, but viewers that are receptive to the slow-burn terror emanating from the visuals and some of the spikier existential undercurrents are unlikely to find it a complete disappointment.